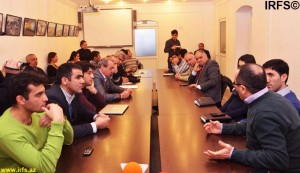 Management of the leading opposition newspaper Azadliq appealed to the public for support in connection with the recent fines imposed on the newspaper, which can result in its closure. At a press conference held in the media center of the Institute for Reporters’ Freedom and Safety (IRFS) on February 21, acting chief editor of the newspaper Rahim Hajiyev noted that the authoriti

try to close down the newspaper in response to constant criticisms. The editor stressed that the government is worried about increased popularity of the newspaper and its online version, which has some 200,000 regular readers.  According to Hajiyev, the bank accounts of the newspaper are expected to be frozen in April due to the fines, which will eventually lead to the closure of the newspaper.

Chairman of Yeni Nasil (New Generation) Journalists’ Union, Arif Aliyev, said huge fines imposed on Azadliq newspaper, and recent attempts by regime to grab control over the online media are aimed at silencing civil society in the run up to the October’s presidential election.

Calling the huge fines imposed on the newspaper unfair and unlawful, Media Rights Institute director Rashid Hajili considered them as part of a larger plan to eliminate the newspaper.

“By allocating 95,000 AZN for Azadliq newspaper via the Council for State Support to Mass Media, the Azerbaijani government wanted to show the international community that they are unprejudiced” said IRFS Chairman Emin Huseynov. “They also envisaged that this contribution will make the newspaper more loyal to the government. But Azadliq newspaper did not change its position, which urged the government to retrieve money through imposing fines” Huseynov added.

The speakers also noted that another reason for the pressure is the fact Azadliq newspaper supports the Azerbaycan Saati (Azerbaijan Hour) TV program broadcast on the satellite channel Media TV, which is produced by former chief editor of Azadliq Ganimat Zahid. The one hour program is produced twice a week, but is very popular in Azerbaijan.

Different suggestions were voiced for achieving an increase in the public support for the newspaper. Media advocates are looking for new ways of beating off the government attacks on freedom of expression.

Background: On February 14 the Supreme Court rejected Azadliq newspaper’s appeal against the 30,000 AZN fine, imposed on the newspaper following a defamation lawsuit filed by Baku Metro Head Tagi Ahmadov. In another defamation case, on February 19 the Court of Appeals upheld 32,000 AZN fine imposed on Azadliq and its correspondent, based on the lawsuit of Bina Shopping Center Kabira Mammadova.