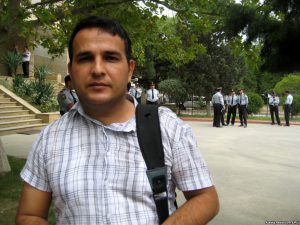 The reporter of Azadliq newspaper and Azerbaycan Saati (Azerbaijani Hour) televised talk show, Natig Gulahmadoglu (Adilov) says he has been subject to attack by Traffic Police officers. As he told IRFS on July 9, the incident happened in Sumgait while Adilov was preparing a report for the Azerbaijani Hour opposition talk show broadcast on one of the Turkish satellite TV channels.

“I saw a policeman involved in the argument with a car driver and and decided to film the scene at a distance, when suddenly the other police sergeant attacked me and began swearing at me at the top of his voice. I introduced myself and demanded that he also abide by the code of conduct, and above all introduce himself. Then they twisted my arm and forced me into their car. The sergeant Allahdverdi Zamanov, who attacked me, was particularly aggressive. Every time I reminded him of laws, he boasted that he is a twofold world champion. After an hour-long argument in their car, they released me” said the journalist.

The journalist intends to appeal to the Interior Ministry regarding the issue.

In a phone interview with IRFS, an employee of the Sumgait branch of the State Traffic Police, who did not reveal his identity, refused to comment on the issue claiming his lack of such an authority.

Government is behind hacker attacks on the AzPolitika.info news portal, the editor says