ROUNDTABLE CONDUCTED ON THEME “AZERBAIJAN BETWEEN RUSSIA AND USA” 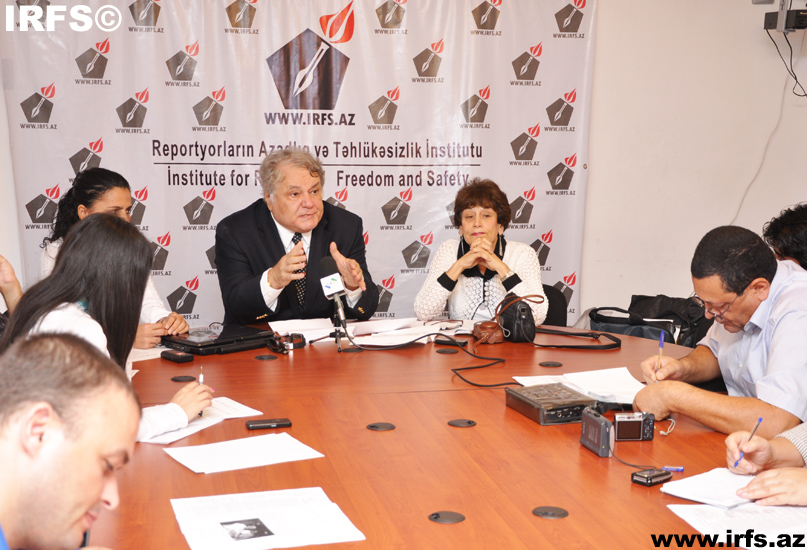 Today, 25 September, in the press center of the Institute for Reporters’ Freedom and Safety, a roundtable was conducted on the theme “Azerbaijan between Russia and USA” where American Political Scientist, Doctor of Sciences Jiri Valenta participated.
J.Valenta opened the event and said that he has been monitoring the incidents in the Caucasus closely and the aim of his visit to Azerbaijan is to learn about the situation here. Noting that other world countries have their own economic, political, diplomatic and strategic interests in the South Caucasus, Valenta said that Russia’s intervention into internal affairs of the South Caucasus is dangerous. He talked about Russia’s intervention in Georgia’s internal stability and in its territory integrity, and reminded that the independence of Southern Ossetia and Abkhazia was recognized by Venezuela and Nicaragua. Talking about Ukraine, Valenta added that there is some danger for Azerbaijan as well.
J.Valenta emphasized that many things should be done in the area of human rights in these countries
Then the guest answered questions from the journalists and other event participants.
Photo: http://www.irfs.az/component/option,com_datsogallery/Itemid,30/func,viewcategory/catid,322/lang,az/
Previous Post