Because of a motion filed by Fariz Namazli, the youth activist’s lawyer, Forensic Examination Centre expert Gulshan Humbatova testified at the hearing as an additional witness. END_OF_DOCUMENT_TOKEN_TO_BE_REPLACED

On 17 and 19 October 2016 Baku Grave Crimes Court chaired by Judge Alovsat Abbasov continued the hearing on the criminal case of Muslim Union Movement’s Chairman Taleh Bagirzade and other members of the Muslim Union Movement, charged under 21 articles of the Criminal Code including homicide, terrorism and incitement.

The APFP Deputy Chairman Fuad Gahramanli who is not a member of the Movement but yet accused of promoting their cause is charged under Articles 220.2 (making calls for active insubordination to lawful requirements of representatives of authority and for mass disorders, as well as violence against citizens), 281.2 (public appeals directed against the state, committed repeatedly or by a group of people) and 283.2.1 (instigation of national, racial, social or religious hatred and hostility, by using or threatening to use violence) of the Criminal Code respectively. END_OF_DOCUMENT_TOKEN_TO_BE_REPLACED 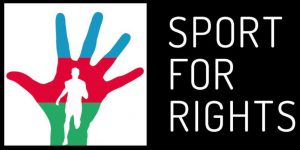 Sport for Rights Coalition Calls on Formula One Group to Act

London, 17 May 2016. The Formula One Group leadership should urge the Azerbaijani government to release unjustly imprisoned activists and journalists ahead of the European Grand Prix in Azerbaijan, said the Sport for Rights coalition today.

Azerbaijan will host its first Formula One European Grand Prix race on 17-19 June 2016 in the capital, Baku. The Azerbaijani government has sought to host a number of high-profile sports and other events in recent years, including the inaugural European Games in 2015, while cracking down on human rights activists and critical journalists, as event organisers stayed silent. END_OF_DOCUMENT_TOKEN_TO_BE_REPLACED

As Baku proudly hosts a regional forum debating the future of internet, the authorities continue to harass local activists trying to draw attention to the country’s shocking human rights. The government of Azerbaijan should use the Regional Internet Governance Forum as an opportunity to free detained and imprisoned journalists and activists, decriminalize libel, and end “witch hunt” on human rights NGOs, the Institute for Reporters’ Freedom and Safety (IRFS) said today.

The three day event is overshadowed by the very fact that it took place in an environment hostile to those that oppose the regime. Nine journalists and three human rights defenders are currently behind bars — most of their cases can be linked to criticism of Azerbaijan’s leadership.

The very idea of the Internet Governance Forum meeting convened by the United Nations Secretary-General is to bring together governments, civil society, and others as equal partners to discuss public policy issues related to the Internet. The Regional IGF, hosted by Azerbaijan, does not meet that criteria. Despite numerous requests sent to the organizers of the conference, the IRFS and other rights groups have been denied a chance to organize a workshop or simply have a thematic stand during the forum. END_OF_DOCUMENT_TOKEN_TO_BE_REPLACED 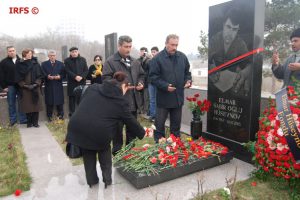 More than eight years have passed since the murder of Elmar Huseynov, editor-in-chief of Monitor magazine. He was gunned 7 times on the staircase of the building where he lived on 2 March 2005 and died in the crime scene. The people, who had ordered and carried out this crime, have not been brought to justice yet. This substantiated the doubts among the community since the very day of Elmar’s death that he was murdered for his sharp-tongued articles in which he severely criticized the authorities.

A criminal case was opened by the Ministry of National Security in connection with Huseynov’s murder. But the Ministry provided very little information to the society about the conduction of investigation. What the Ministry disclosed about investigation was that the men suspected of committing the crime were Georgian citizens Xubanov Tahir Bayram oglu and Aliyev Teymuraz Adil oglu. The Ministry stated that these men were being searched and all the necessary steps were being taken. END_OF_DOCUMENT_TOKEN_TO_BE_REPLACED

On November 19, 2011, writer and journalist Rafiq Taqi was attacked in the street near his home by an unknown assailant who stabbed him seven times. Following surgery, Tagi had appeared to be in recovery, but he then died four days after the attack under circumstances the IRFS considered suspicious.

Rafiq Taqi was attacked in the street near his home by an unknown assailant who stabbed him seven times at around 7 pm while walking home from work. Although Taqi sustained severe injuries, he still managed to get home with great difficulty. His family immediately called an ambulance. By the time the ambulance arrived (allegedly  late) Taqi had lost much blood. He was taken to the Public Hospital #1, where after quick check-up he was placed into the intensive care unit and underwent the surgery. Two days after the surgery, i.e. on November 21st  Taqi was transferred to the ward, which was not a correct step according to his friends and colleagues as his injuries were severe. After being placed in the ward and on the fourth day of treatment his heath suddenly declined and he was placed in the intensive care unit again, but the doctors could not save his life.

Rafiq Taqi’s body was examined in the Health Ministry’s Forensic Medical Examination and Pathological Anatomy Unit by the decision of the Serious Crimes Investigation Department of the General Prosecutor’s Office on November 23. According to preliminary findings of the examination, the cause of Taqi’s death was health complications (peritonitis, pleurisy, edema, etc.) which developed due to the knife injuries.   END_OF_DOCUMENT_TOKEN_TO_BE_REPLACED

Still No Justice for Murdered Journalists in Azerbaijan

The climate of impunity which allows attacks on journalists in Azerbaijan to remain unpunished is contributing to the on-going repression of free expression, the Institute for Reporters’ Freedom and Safety said today. On International Day to End Impunity, the organization calls for justice for journalists who have been killed and attacked because of their work.

The organization condemns in the strongest terms impunity for those responsible for the murders and repression, as well as lack of official concern for the protection of media professionals. END_OF_DOCUMENT_TOKEN_TO_BE_REPLACED

On the World Television Day, the Institute for Reporters’ Freedom and Safety (IRFS) calls on the Azerbaijani government to embark on reforms to ensure broadcasting pluralism and diversity in Azerbaijan.

The United Nations’ (UN) World Television Day is annually observed in many places around the world on November 21. The day recognizes that television plays a major role in presenting different issues that affect people.

Three (AzTV, Idman Azerbaijan and Medeniyyet Azerbaijan) out of the nine national television channels are state-owned, and in contrast to the international trend of privatizing state media, the Azerbaijani government continues to open a new state television station approximately every other year.

Because the government exercises full control over the broadcast licenses via the National Television and Radio Council (NTRC), the licensing of broadcast media outlets remains highly political, biased, and non-transparent. The NTRC consists of seven acting members appointed directly by the president and is fully funded from the state budget. There is no legal guarantee of its independence.

For instance, NTRC failed to take any measures against private broadcaster Lider TV, which repeatedly broadcasted intimate videos of opposition activists, in direct violation of the Law on TV and Radio Broadcasting. END_OF_DOCUMENT_TOKEN_TO_BE_REPLACED