A Group of Goychay Residents Rally against Police Arbitrariness 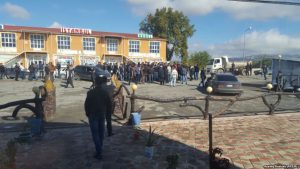 A group of residents of Goychay region have held a protest in the regional centre to demand the resignation of local Traffic Police Chief Vugar Gasimov. According to the protesters, the traffic police chief is rude, demands money and exceeds his powers.

Mehdi Salimzade, head of the regional executive authority, met with the protesters and promised that this issue would be investigated objectively.

After talking to the regional executive power head, the protesters dispersed. About 30 residents of the region participated in the protest.

Although reports emerged about the discharge of Goychay regional traffic police chief shortly after the protest, the Ministry of Internal Affairs (MIA) denied this allegation and commented on the protest.

Orkhan Mansurzade, head of MIA Press Service, has said that, like everywhere in the country, routine traffic inspections are conducted in Goychay region in order to ensure road safety. “Among the key factors necessitating such traffic inspections in the region, the recent road accidents caused by unlicensed drivers resulting in the death of three pedestrians and the obstruction of traffic on Baku-Yevlakh-Shamakhi highway by illegally parked trucks can be cited as an example. Only in the first half of October, traffic police officers have discovered 313 cases of traffic violations in Goychay region,” the MIA official said.

Mansurzade also noted that the heads of the local law enforcement agencies of the region had met with ‘those persons seeking to draw public attention’ (the participants of the protest), asked about the issues troubling them, and told them that traffic raids against cases of gross traffic violations and other measures in this direction were aimed at ensuring the safety of not only them, but all residents of the region in general.

Finally, Mansurzade said that the reports published by some news websites about the dismissal of the traffic police chief were misinformation.

Suffocating Freedom of Expression in Azerbaijan