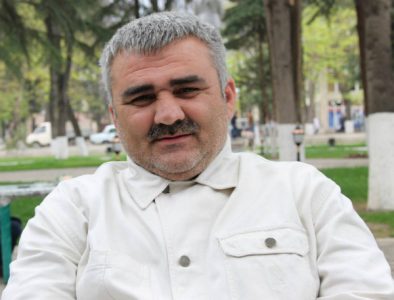 Balakan District Court has launched proceedings on journalist Afgan Mukhtarli’s case with a preliminary hearing, which was attended by representatives of the US embassy and members of the local community. At the hearing, journalist’s lawyers Nemat Karimli and Elchin Sadigov filed several motions.

Firstly, Nemat Karimli requested that the journalist be removed from the enclosed glass dock and be seated next to his lawyers, which according to the lawyer, was important in terms of organising the defence as the lawyer might need to consult his client when necessary.
Judge Humbat Salimov initially did not give permission, but then changed his mind and Mukhtarli was brought and seated beside his lawyers.

Nemat Karimli lodged a second motion, which sought discontinuation of the criminal proceedings against his client. The lawyer noted that the allegations about Afgan Mukhtarli crossing the Georgian-Azerbaijani border illegally and bringing money with him were a lie. According to the lawyer, there were no reliable evidence to confirm this allegation. “Afgan Mukhtarli was abducted and brought from Georgia and faced these charges. There are a number of facts to prove this. For example, in his statement from 14 September, the Georgian president has stated that ‘what happened to Afgan Mukhtarli is a blow to the country’s sovereignty and security’. The resolution adopted in the European Parliament with the participation of 90 MPs also states that Afgan was abducted and brought [to Azerbaijan]. In Georgia, a criminal case has been initiated in this connection for abduction. All of these are more reliable evidence. In Afgan Mukhtarli’s criminal case, the prosecution evidence consists of statements by soldiers serving in the border. Those soldiers are under command and can give any statement,” the lawyer said.
Lawyer Elchin Sadigov filed motions to change the pre-trial detention measure against Afgan Mukhtarli, to conduct a new expert examination of the money allegedly found on Mukhtarli, to obtain video recordings from the border checkpoint and the military unit where the journalist was taken after being brought to the country, to send an enquiry to the neighbouring country to find out whether the Georgian border was violated on the relevant day, and to remove some of the documents from the list of evidence.

“We agree to the application of any measure of restraint other than arrest. Afgan Mukhtarli’s registered and actual residence is in Zagatala and his relatives also live there. It would be more convenient for him to travel to and from the court from there. Most importantly, the prosecution presented three reasons when selecting the measure of pre-trial detention against him: he can go into hiding, put pressure on the witnesses, and falsify the evidence. The investigation has already been completed and these reasons are no longer relevant, though there were not relevant previously either. If a repeat expert analysis is conducted with regard to the money, it may reveal the customs officials’ finger and hand prints on it. We kindly request that the video recordings from the day of Afgan Mukhtarli’s detention be reviewed, because Afgan has not crossed the border illegally. He was brought through the border by those who abducted him in Georgia. This issue may become clear once the recordings are reviewed. Afgan Mukhtarli was then brought to a military unit and held there for some time. We filed a motion about this with the investigative agency and the investigator said there were no cameras in the military unit. Let the military unit be checked to see whether there are cameras or not,” the lawyer said to substantiate the motions.

Public prosecutor Gurbat Mammadov assessed the motions as baseless and requested their dismissal. During the prosecutor’s speech, Afgan Mukhtarli also started to speak. The judge assessed Mukhtarli’s act as disrespect. The journalist’s response was as follows: “What I am doing is not disrespectful. Disrespectful is when you come here with folders under your arm and tell a lie without being acquainted with the case.”
After a brief deliberation, the judge declared that the motions were not granted. The main hearing was set for 14 December.