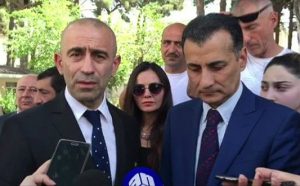 > The plaintiff’s motion was not granted in the legal dispute with the National TV and Radio Council (NTRC);

> The television channel’s representative filed an objection to the jury composition.

ANS has appealed the decision issued by Baku Administrative-Economic Court #1 on 23 December 2016, when the court granted the NTRC’s claim and ordered ANS to refund AZN 160,000 allocated to it for soap opera production along with a fine of AZN 8,000 (a total of AZN 168,000).

ANS has filed a counter-claim demanding that, on the contrary, the NTRC should pay AZN 40,000 envisaged under the contract on soap opera production but not transferred, and additional AZN 11,489 (a total of AZN 51,489).

Claiming that the soap opera produced by ANS did not conform to the contract, the court held that the NTRC was right to demand the allocated funds back.

In Baku Court of Appeal, ANS’s representative Sevda Maharramova filed a motion to summon a specialist in the field of moviemaking for an expert testimony. The lawyer asked the court to defer the hearing until the expert was invited, but the jury left the motion unresolved.

Then, the parties expressed their opinions on the appeal. NTRC representative Togrul Mirzazade said the appeal was unfounded and a written objection to it was presented to ANS’s representatives.

ANS representative Sevda Maharramova said the court’s decision was groundless. According to her, ANS has not violated its contractual obligations.

After listening to both parties’ views, Judge Vidadi Mammadov announced the court’s conclusion that there was no need to grant the motion to invite a movie expert.

It was followed by an objection to the jury composition by ANS who argued that the parties were not provided equal opportunities, because of which, they were sceptical whether the court would produce a fair decision.

The hearing on ANS’s appeal will continue on 13 April.

By then, Chairman of Baku Appeal Court Iman Nagiyev needs to consider and decide the objection.

Background: The NTRC sued ANS Independent Broadcasting & Media Co. demanding that it repay the 160,000 AZN assigned for the production of Absheron soap opera and an 8,000-AZN fine to the state budget. The NTRC’s argument was that ANS TV presented the Sevgi Namina (For the Sake of Love) soap opera instead of the Absheron. ANS filed a counter-suit.

On 18 June 2016, the NTRC decided to stop the broadcasting of ANS TV in order ‘to prevent the provocation aimed at disrupting strategic partnership relations between Turkey and Azerbaijan, and open terrorist propaganda’. According to the decision, the broadcast license of ANS CM Broadcasting & Media Co. was terminated. Anspress.com website, which belongs to ANS Group of Companies, also ceased operations. The sanctions against ANS stem from an ANS reporter’s participation at a press conference of Fetullah Gulen, who resides in the US and is accused by Turkish officials of masterminding the July 15 coup attempt in Turkey, and her interview with Gulen.