In the observance of the International Anti-Corruption Day and International Human Rights Day, the Institute for Reporters’ Freedom and Safety (IRFS) reaffirms its commitment to defending and promoting thesetwo of the most important pillars of a healthy and democratic society. Azerbaijan –a country recognised for its human rights abuses and widespread corruption –should be held accountable by UN and other international and regional bodies for the ongoing crackdown on peaceful dissent and anti-corruption activists, IRFS said.

The Azerbaijani authorities have a long history of suppressing and punishing free speech as well any dissenting voices. The absence of freedoms in the society is directly connected to a high level of corruption, which is also the main motivation for the government to commit various crimes against its people.

This shameful record has reached completely new lows when series of investigations across Europe, published in September 2017 and led by the Organised Crime and Corruption Reporting Project (OCCRP), exposed a exposed Azerbaijan’s multi-billion scheme to carry influence, pay lobbyists, and to launder cash.

One year since the investigation was published nothing has changed in Azerbaijan. No criminal investigation has been launched; no one held to the account. Azerbaijan’s bilateral and multilateral partners continue their business as usual relations with the corrupt and undemocratic regime while Azerbaijan’s brightest activists and journalists continue paying the price for their courage to expose corruption and human rights violations in their home country.

One of them is the IRFS Chairman Mehman Huseynov, who has become well-known in Azerbaijan and globally for his hard-hitting efforts to expose corruption. Mehman has been in jail since March 2017 on bogus defamation charges after he had produced and disseminated a number of stories revealing corruption and torture by Azerbaijani officials.

Huseynov is not the only victim of Azerbaijan’s authoritarian regime. In the recent years, civil society in Azerbaijan has been under constant pressure from the authorities. The politically motivated arrests and criminal cases against non-governmental organisations, the fabrication of bureaucratic obstacles during the process of registration of grant contracts and receiving funding in the form of grants and donations; the pressure on relatives and family members, the disbarment of lawyers of political prisoners; the interdiction to leave the country imposed on human rights defenders and the enforcement of legislation that restrains the non-governmental sector became the authorities’ weapons of choice against its critics and opposition.

Virtually allthe independent journalists, bloggers, writers and poets of Azerbaijan who merely wish that the authorities respect the norms of a civil society by using traditional and social mass media, and who fight for justice confronting the corrupt officials, are facing deliberate and politically motivated persecution.

The IRFS calls on the international community to hold the Azerbaijani authorities accountable for their crimes against democracy and in particular against journalists and human rights defenders that have been wrongly persecuted for their work. IRFS welcomes the fact that on 10 December European Ministers of Foreign Affairs unanimously approved the Dutch proposal for the E.U.-wide Magnitsky and the proposal will now be developed into legislation. There is no better way to hold regimes like the one in Azerbaijan accountable for human rights abuses, IRFS said.

We also turn to the international community for their help and support in backing up the independent voices of Azerbaijan and assisting them in developing a stable and long-term mechanism to support the independent mass media and other civil organisations. 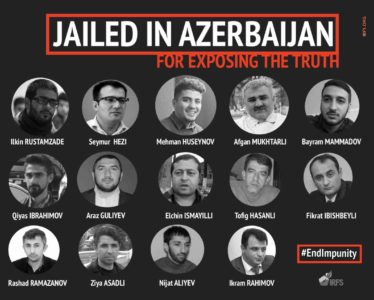