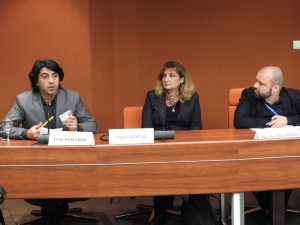 The co-sponsor of the event, Danish parliamentarian Nikolaj Villumsen, opened the event by reminding the audience about the unheld promises byAzerbaijan’s President Aliyev. “When Mr Aliyev visited the Council of Europe and the Parliamentary Assembly, he made a promise to engage in dialogue with the civil society of Azerbaijan. He has not lived up to this promise as what we have seen since then is a severe crackdown on the opposition, media and freedom of expression”, Villumsen said.

In fact, the transfer of power from Heydar Aliyev to his son, Ilham Aliyev, who was elected president in October 2003, raised hopes that the Soviet-style regime would become more moderate. However, Ilham Aliyev disappointed these hopes, despite his rhetoric on the need to cooperate with the West, including the Council of Europe, the EU, and NATO, and enact reform to comply with European standards, and has instead continued many of his father’s practices, including his strategy of authoritarian rule.

Since Azerbaijan joined the Council of Europe, in 2001, the space to express critical views in Azerbaijan has been gradually and progressively curtailed. Human rights defenders, representatives of independent civil society organizations, members of the political opposition, activists, and ordinary citizens have all been victims of the Aliyev regime’s crackdown on fundamental rights and freedoms.

Ukrainian parliamentarian Nadiya Savchenko, another co-sponsor of the side event said :”Nowadays we can witness many instances whereby democracy is mocked, and Azerbaijan, a state that used to be democratic prior to becoming a part of the Soviet Union, is one of those examples. Unfortunately, many countries that were in the Soviet empire, are now experiencing democratic deficit and Europe has no right to turn a blind eye to this worrying trend “.

Other side event panellists included Gulnara Akhundova, the Team Leader for Europe and Central Asia at the International Media Support; Dr. Leyla Aliyeva, Director of the Centre for National and International Studies, Erkin Gadirli, the board member of the Republic Alternative Movement (REAL), Emin Huseynov, Director of the Institute for Reporters’ Freedom and Safety delved into the legal and political challenges emanating from the constitutional referendum as well as the general situation of civil society in Azerbaijan.

Speaking about legitimacy issues related to the referendum Erkin Gadirli, board member of the REAL movement, noted “The legitimacy of the constitutional referendum is dubious as it was announced unexpectedly, without prior consultation with the Parliament or civil society. Furthermore, the way the referendum was conducted also suffered from the lack of legitimacy”.

“No alternative views were allowed to be heard, no opposition group was allowed to register for official campaigning, and even the pro-governmental groups did not use their airtime to explain the amendments to the public. In essence, the voters were deprived of an opportunity to make an informed choice.”, Gadirli highlighted.

In his turn, Emin Huseynov, underlined how the constitutional amendments were employed to secure power by Aliyev regime in Azerbaijan “All three constitutional referendums occurred at the will of the ruling Aliyev family”. He reminded that the first constitutional referendum in 2002 was called by Heydar Aliyev to ensure the succession of power by his son IlhamAliyev. In 2009, IlhamAliyev changed the Constitution yet again in order to strengthen his rule by abolishing the limit on consecutive presidential terms. Finally, in 2016, by eliminating the age restriction for presidential elections, IlhamAliyev paved the way for his son Heydar to take over the presidency in the future, Huseynov highlighted.

Dr. Leila Aliyeva, who had to leave the country amidst the crackdown on the independent voice in 2014, a researchfellow at St Antony Colleage of Oxford University, believes that both the conduct of the referendum and constitutional amendments contradict the norms and values of the Council of Europe.“Instead of strengthening people’s power they in fact undermine it by giving more power to the government. The referendum can also be viewed as representative of the rise of illiberalism that can be observed in both Eastern and Western parts of the world.”, she said.

Gulnara Akhundova, said: “Independent civil society in Azerbaijan is completely silenced. They are deprived of participation in political and public life”. Akhundova reminded that a number of civil society activists are not even allowed to participate in the initiatives implemented by the Council of Europe office in Baku..

The Unsolved Murder of Rasim Aliyev

Changes to be Made to Mass Media Law Regarding Religious Extremism