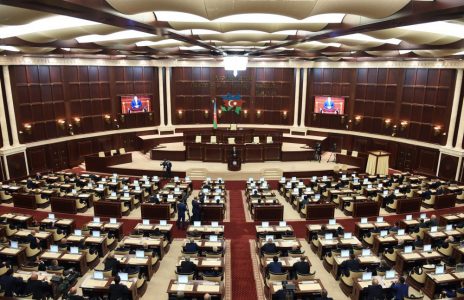 ➢ The relevant executive authority will immediately warn the website and its host provider in the event of detecting information prohibited from dissemination. Upon receipt of the warning, the website owner must immediately remove that information from the website;
➢ Unless the prohibited information is deleted within 8 hours of warning, the relevant executive authority will appeal to court to restrict the website;
➢ MP Siyavush Novruzov underlined the importance of further tightening of legislation and entry of the identity card number when writing comments on social media.

A registry of closed-down resources will also be developed. To this end, the relevant authority will prepare a “list of websites containing prohibited information.” Providers have to block access to the resources included in this list.

Besides, providers of all levels will be registered. Based on requests of law enforcement agencies, courts and executive authorities, providers must present information on users within 3 days.

According to the bill, new rules will be defined for registration of national domain names. All legal entities must necessarily upload information about themselves on their internet resources.

The bill was discussed by parliamentarians. MP Siyavush Novruzov said it was important to further tighten the bill on information security. He noted that it was necessary to require a login with identity card data before writing comments on social networks. “Internet is completely free in our country. Anyone insults whoever he wants, without understanding that his words are read by all people. They create a fake profile and write whatever they want. In that case, the owner of the internet portal must be called to account. Or, an identity card login should be required. They create a portal abroad and put up articles on Azerbaijani army and soldiers, and, others pick up news from there and repost it. The same person then deletes such false news stories. You find out that they are those who have fled the country somehow. Such information affects the society,” Novruzov said.

The MP also commented on the media reports on suicides. According to him, there are European countries that top the list according to the number of suicides in the world, but despite Azerbaijan having a massively smaller suicide rate, the information is exaggerated. “Weren’t there suicides or car crashes during Soviet times? Internet sites put more important issues aside and move these issues to the foreground for popularity. By so doing, they encourage others to do the same. All of our television channels broadcast crime news. Trying to gain points by hastily presenting the information to the public is not the right thing to do. This kind of information leads some people in negative directions,” Novruzov added.

Press Council chairman, MP Aflatun Amashov in turn noted that some forces both inside and outside the country were interested in interpreting the bill as a restriction.

According to Amashov, internet plays a role in the system of legal relationships in many leading countries around the world. “This means that online space has transformed from being virtual into being real. As a result, specific types of responsibility have been determined. The same process goes on in Azerbaijan, and it should. Of course, there are certain issues open to debate, because this is essentially a new and dynamic area. There is always a need to discuss something. At this stage, we should not forget that we live in a state of war. Regulation of online space is necessary for information security of our country. You can be sure that these amendments do not imply arestriction of the freedom of speech and expression in any way. We have always stated that the landscape produced by the development of the internet manifests itself mainly in the example of online media outlets. They are closer to society. Negative or positive sides of their activity have more impact on society. Public criticism stemming from such negative effects is directed to the journalism as a whole. Therefore, I believe that the amendments are useful, first and foremost, for people who care about the profession of journalism,” the Press Councilchairman noted, emphasising the importance of the legislative amendments.

The draft law was not opposed by anyone and was unanimouslyaccepted.

Note that, the government has been seeking to regulate and control online media and websites for several years now. MP Malahat Ibrahimgizi and Hadi Rajabli have already made initiatives in this regard. Press Council chairman, MP Aflatun Amashov has also been one of the protagonists of regulation of online media.

Serious steps have been taken towards restriction of freedom of expression in the first months of 2017. Several youths have been sentenced to administrative imprisonment on various charges due to their blogging activity. The new law will provide a legal basis for further toughening of punishments.