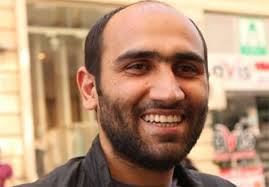 Musavat Party deputy chairman, blogger Faraj Karimli has been released an amnesty act adopted on 20 May 2016.

Faraj Karimli was arrested on drug possession and trafficking charges on July 23, 2015. He was sentenced to 6.5 years in jail on May 6, 2015. Faraj was the administrator of the “Istefa” (“Resign”) Facebook group and the musavat.org.az website. He was also the founder and administrator of another Facebook page named “Basta.”

On 24 May 2016, the Supreme Court reclassified Faraj Karimli’s case from Article 234.4.3 (drug trafficking in a large amount) of the Criminal Code to Article 234.1 (illegal purchase or storage of narcotics or psychotropic substances in a quantity exceeding the thresholds for personal use without the intent to sell) of the Code, and handed him a definitive 3-year jail sentence. Thus, the court reduced Karimli’s original 6.5-year sentence to 3 years.

According to Faraj Karimli, the reason the amnesty act is implemented so late and he is released only now is because of the referendum. “After my sentence was commuted by the Supreme Court on May 24, they transferred me to Prison #14 and told me that I would be released in 5 to 10 days. Then the process dragged on, the referendum come in between and I was released after the referendum,” the blogger said.

Faraj Karimli added that he had been arrested by order of the authorities.

Karimli said he would continue his activities even more actively.