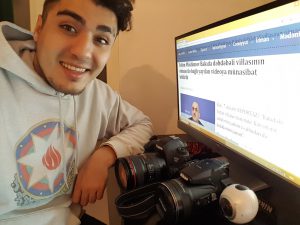 On 12 January, blogger and human rights defender Mehman Huseynov gave evidence at Baku City Prosecutor’s Office regarding his torture by the police during his arrest. The interview lasted from 4.20 pm to 7.30 pm. Investigator Hafiz Aliyev interviewed him.

According to Mehman Huseynov, he has also undergone expert examination.

Background: The police detained Blogger Mehman Huseynov at evening hours on 9 January. A criminal case was launched against him under Article 535.1 (disobedience to lawful requirements of the police) of the Administrative Violations Code. On 10 January, Nasimi district court fined him 200 AZN after which he was released. Following the hearing, Huseynov told the journalists that the police tortured him. On 11 January, Mehman Huseynov’s lawyer Elchin Sadigov disseminated photos showing injuries on his body and bloodstains on his clothes.

Along with fining the blogger, Nasimi District Court also ordered that his torture complaints be investigated by the prosecutor’s office.

Journalist Sentenced to two and a half years in Jail