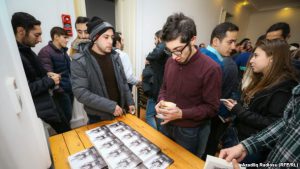 On 11 December, a presentation was held for a book translated by former political prisoner Rashadat Akhundov. Azerbaijani blogger Ali Novruzov moderated the event.

Rashadat Akhundov, a youth activist and board member of the NIDA Civic Movement, was sentenced to eight years in prison in May 2014. He was accused of organising mass disorders, and illegal drugs and weapons possession. On 17 March 2016 he was released by presidential pardon.

Rashadat Akhundov translated Ryszard Kapuscinski’s “King of Kings” during his jail-time.
Akhundov said the money raised from the sale of the book will be spent for the NIDA members who are currently behind bars.

Journalists to Take Fight Against Travel Ban to European Court