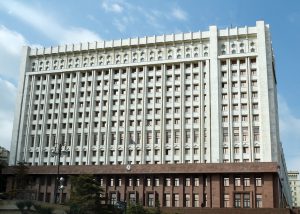 On 6 January, a group of people, who had chained up themselves, attempted to hold a protest outside the building of the Presidential Administration (PA). However, they were not allowed to gather, as reported by one of the protesters by name Ulviyya Abutalibova.

According to her, the protesters’ grievances were over different issues, such as the arbitrary arrest of the spouse, the confiscation of the property, or complaints about the now-dissolved Ministry of National Security or local executive authorities.

Abutalibova noted that all of the protesters had been taken into the PA building, and the journalists covering the protest had also been detained.

She added that they had been made to wait for several hours inside the PA building. “They first said that we would be received by officials. But then they told us that because we were holding a ‘chained protest’, they would receive us at a later time,” Abutalibova said.

The protesters have registered for a reception on 9 January, but do not know who will receive them.

Note that the participants of the ‘chained protest’ have also attempted to hold similar protests before, by wrapping themselves in shrouds and gathering in front of the Prosecutor General’s Office, the Ministry of Internal Affairs, the Cabinet of Ministers, the Ministry of Justice and other state agencies.