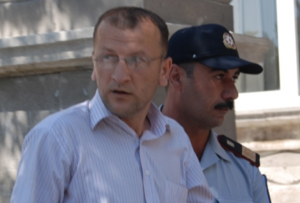 “I was received by Major Javanshir Guliyev in the fifth police station. He told me that the police station had received a material about Bayram Safarov who had been martyred during the invasion of Shusha 25 years before. A statement was taken from me in that regard. It appears that the State Commission on Prisoners of War, Hostages and Missing Persons has been investigating the case of Bayram Safarov who participated in the battles together with me. It was the Commission’s request to take my statement,” Hajibayli said.

Hajibayli could not get a response from the police as to why an event of 25 years ago is being investigated now. “They had failed to investigate it for 25 years, and now they called me to the police station at night time. After I said I could not come at night, they asked me to come the next morning. I answered their questions and wrote a statement. I believe that their intention is to put pressure on me. Major Javanshir Guliyev criticised the Elchibay government and praised the Aliyev administration throughout the conversation. I have already been summoned by the police several times on various pretexts. I believe that these pressures are associated with Basta’s activities,” the editor said.