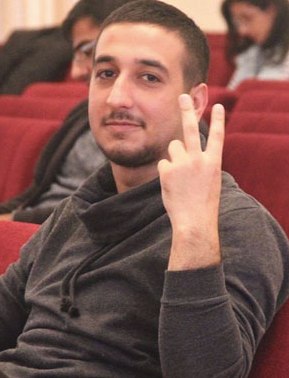 According to NIDA Youth Movement, youth activist Bayram Mammadov has been placed in solitary confinement in Prison #13 where he is serving a sentence.
As reported by the Movement, Mammadov has been ordered to spend 30 days in solitary confinement. The sanction imposed on Mammadov stems from him protesting against the fatal beating of an inmate from Sabirabad region. Mammadov was also reportedly beaten.
Mammadov’s family does not receive timely information on his condition. His father Farman Mammadov says they had their last phone conversation with Bayram on December 12, when Bayram did not inform his parents of anything of concern.
Efforts to learn the reasons behind Bayram’s placement in solitary confinement from the Penitentiary Service of the Ministry of Justice or from Prison #13 were futile.
Background: Bayram Mammadov was detained on 10 May 2016, along with youth activist Giyas Ibrahimov. The authorities brought drug charges against them.
The court confirmed the charge of drug trafficking and sentenced each activist to 10 years in jail. However, the youth rejected the drug charges during their trial and maintained that they had been arrested for writing ‘Happy Slave Holiday!’ on the monument of former president Heydar Aliyev, the father of incumbent Ilham Aliyev. Amnesty International has declared Giyas Ibrahimov and Bayram Mammadov as ‘prisoners of conscience’. The organisation believes that the drug charges brought against the youth were trumped-up.
Representatives of the Azerbaijani government do not agree with the views that the two are political prisoners and assert that they have been sentenced for particular crimes.
Previous Post

Director of “Channel 13” sentenced to 6 years