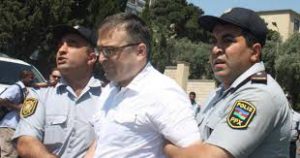 The Committee of Ministers of the Council of Europe has expressed its deepest concern over the fact that REAL Movement Chairman Ilgar Mammadov remains in prison despite the European Court of Human Rights (ECtHR) 2014 judgment ordering his release, as well as repeated calls by the Committee of Ministers and the Secretary General for the execution of the judgment and the immediate release of the applicant.
The Committee condemned the appeal proceedings on Mammadov’s case held by the Supreme Court of Azerbaijan, which ended without confirming or redressing the violations of the politician’s rights under several articles of the European Convention previously identified by the European Court.
The Council of Europe’s decision-making body once again underlined that depriving Ilgar Mammadov of his liberty simply for criticising the authorities through flawed judicial proceedings and in contravention of the ECtHR ruling constituted a blatant violation of Azerbaijan’s obligation under the European Convention to abide by the final judgment of the European Court.
Finally, the Committee of Ministers encouraged the government of Azerbaijan to update the Committee on general measures undertaken to prevent violations of the rule of law through abuse of power.
Ilgar Mammadov and Tofig Yagublu were arrested on 4 February 2013, in the wake of the protests that swept Azerbaijan’s north-western city Ismayilli on 23 January 2013, during which the “Chirag” Hotel and four cars were set alight. The protests broke out after a Chirag Hotel employee, Emil Shamsaddinov, caused a road accident due to drunk driving, after which he and his passenger, Elmaddin Mammadov, physically assaulted a passer-by, Ramil Bakirov. The two also insulted the local residents in front of a crowd, which had gathered in the area. More than 15 people who had participated in the protests, as well as Emil Shamsaddinov and Elmaddin Mammadov, were later arrested. Ilgar Mammadov and Tofig Yagublu travelled to Ismayilli the day after the protests, on 24 January, in their capacities as a political figure and a journalist respectively. Their intention was to obtain firsthand information from locals about what had happened.

Yagublu and Mammadov were initially charged under Articles 233 (organisation of actions promoting infringement of the public order or active participation in such actions) and 315 (resistance to a representative of authority) of the Criminal Code. Later, the charge under Article 233 was dropped, and a new charge under Article 220.1 (organisation of mass disorders accompanied by violence, pillage, arson or destruction of property or participation in such disorders) was brought against them.
Under the Shaki Grave Crimes Court judgment of 17 March 2014, Ilgar Mammadov and Tofig Yagublu were sentenced to seven and five years in prison, respectively. Their appeal was denied by Shaki Appeal Court. On 13 October 2015, the Supreme Court returned the case to Shaki Appeal Court for reconsideration. The Shaki Appeal Court upheld the verdict on 29 April 2016. Journalist Tofig Yagublu was released under presidential pardon on 17 March 2016.
On 22 May 2014, the European Court of Human Rights ruled that the government of Azerbaijan had violated Ilgar Mammadov’s rights under Articles 5.1 and 5.4 (right to liberty), 6.2 (presumption of innocence) and 18 (limitation on use of restrictions on rights) of the European Convention on Human Rights.