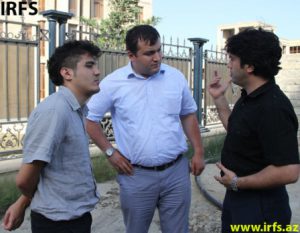 ➢ Lawyer Elchin Guliyev’s motion to decline to accept the private prosecution complaint about review was not granted;
➢ Mehman Huseynov waived his state-appointed attorney;
➢ Mehman Huseynov’s identity was verified based on a photo.

Mehman Huseynov told the judge that he had submitted an application on waiving his public defender at the previous hearing. “But Eldar Alyarov still attends,” Mehman Huseynov said.

Judge Jeyhun Gadimov noted that the written waiver of the lawyer had been handed in after the previous hearing. “The waiver will be discussed at this hearing, and after that, a decision will be taken,” the judge replied.

After explaining to Mehman Huseynov his rights provided by the Criminal Procedure Code, the judge put the issue of waiving the lawyer up for discussion. He asked Mehman Huseynov whether the waiver was due to his financial situation. Mehman Huseynov responded that he had his lawyer. “Elchin Sadigov has been my attorney for several years. Therefore, I do not need another lawyer,” he said.

The judge ordered that the state-appointed lawyer is removed from the proceedings.

The judge then reminded that at the previous hearing lawyer Elchin Sadigov wanted to see the order on private prosecutor Musa Musayev’s appointment as the police chief. He noted that the opposite party had presented an official document in that regard. Elchin Sadigov familiarised himself with the document.

The judge then quoted lawyer Elchin Sadigov as saying at the previous hearing that as Mehman Huseynov did not have an identity card, it was questionable whether he was the person named. “In this regard, the opposite party has presented a photo-bearing excerpt from the portal of the Ministry of Internal Affairs regarding Mehman Huseynov’s identity card,” the judge said.

Judge Jeyhun Gadimov asked Mehman Huseynov whether the person in the photo was him. “It is some orphan,” the blogger replied in jest.

Then, Elchin Sadigov lodged a motion to refuse to accept the private prosecution complaint about consideration. He noted that Mehman Huseynov’s speech, which was the subject of the complaint, had been made in front of Nasimi District Court. “If the private prosecutor believes that his honour and dignity was insulted and he was slandered in that speech, then he has to appeal to the court according to the territory where this happened, the statement was made,” the lawyer argued.

The lawyer also stressed that the private prosecution complaint contains a line that says ‘there has never been torture in Nasimi police’, which was impossible to agree with. Sadigov substantiated his view by referring to European Human Rights Court (EHRC) judgment of 7 May 2015, which recognises the fact that the blogger’s brother, former head of the Institute for Reporters’ Freedom and Safety (IRFS) Emin Huseynov was illegally arrested and tortured in the 22nd police station of Nasimi District Police Department. “This judgment proves that the police chief’s account that officers of Nasimi District Police Department have never tortured anyone was not accurate,” Sadigov said.

Sadigov further noted that in one of its precedent-setting decisions, the EHRC underlined the inadmissibility of criminally prosecuting someone for freedom of expression.

Commenting on the motion, lawyer Alirza Habilov stated that this issue had to do with Mehman Huseynov’s remarks about officers of Nasimi district police department, not Emin Huseynov. “The prosecutor’s office has conducted the investigation into Mehman Huseynov’s subjection to torture, and it did not prove true. So, it was decided to decline to launch a criminal case,” Habilov said.

Lawyer Elchin Sadigov replied that the said decision had been appealed and would be heard by Nasimi District Court today.

Regarding the issue of forwarding the case to Nasimi District Court according to the territorial jurisdiction principle, Musa Musayev’s lawyer said as the media outlets that had disseminated Huseynov’s video-message were based abroad, the legislation allowed filing the lawsuit according to the place of residence. He added, however, that he did not object to the territorial jurisdiction-related change, and left it up to the court’s discretion.

After a deliberation, the judge announced the decision of the preliminary hearing. According to the decision, the complaint was accepted for consideration. The restrictive measure of travel restrictions was chosen in respect of Mehman Huseynov.

Huseynov noted that the measure of travel restrictions had already been applied in respect of him for the past five years.