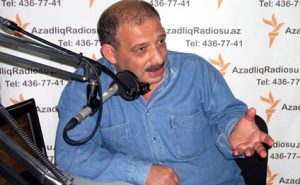 Former political prisoner released on probation, journalist Rauf Mirgadirov has been given permission by court to leave the country. Sharing the news Rauf Mirgadirov said he would first travel to Germany and from there to Warsaw to participate in a 3-day workshop.

“Upon completion of the workshop I will go to my family who live in Switzerland. The court granted my claim related to travelling abroad and allowed my travel out of the country,” the journalist said.

Rauf Mirgadirov did not comment on whether he will return to the country or not.

Background: Ankara-based journalist Rauf Mirgadirov was deported from Turkey and was arrested in Baku on 19 April 2014. On 28 December 2015, Baku Grave Crimes Court found the journalist guilty under Article 274 (state betray) of the Criminal Code and sentenced him to 6 years in prison. On 17 March 2016, Rauf Mirgadirov was released under a suspended sentence by the decision of the Court of Appeal.