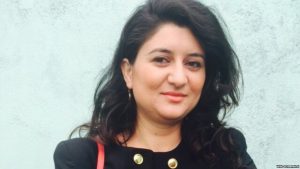 Nasimi District Court, chaired by Judge Babak Panahov, held a hearing on the complaint filed by Izolda Agayeva, a journalist who formerly collaborated with Meydan TV, requesting the invalidation of the travel ban prohibiting her from leaving the country. Journalist Izolda Agayeva was repeatedly interrogated at the Investigation Department of the Prosecutor General’s Office and the Main Organized Crime Department of the Ministry of Internal Affairs back in September and October of 2015 in relation to Meydan TV. On March 21, 2016, the journalist was prevented from crossing the border into Georgia at Sinig Korpu border checkpoint on her way to Turkey through Georgia for postgraduate education. In response to the journalist’s lawyer Yalchin Imanov’s inquiry, the Serious Crimes Investigation Department of the Prosecutor General’s Office replied that Izolda Agayeva was prohibited from crossing the border in connection with the investigation necessities of the criminal case #152006048 led by the Department, and a supervisory complaint was filed with court against it.

The hearing was held behind closed doors and was attended by the journalist’s lawyer Yalchin Imanov and Orkhan Hajiyev, the representative of Serious Crimes Investigation Department of the Prosecutor General’s Office.

Speaking about the hearing, Yalchin Imanov quoted the Prosecutor’s Office representative as saying that the international travel restrictions were imposed against the journalist due to investigation necessities as part of the criminal case launched into the illegal actions of Meydan TV.

“As the Prosecutor’s Office representative failed to answer some of our questions, it is important that Ali Babayev, the investigation team head of the criminal case against Meydan TV, be invited to court. The hearing was postponed until June 21, to ensure the investigation team head’s participation in the hearing and to submit the documents explaining the reasons for the travel ban to the court,” the lawyer said.