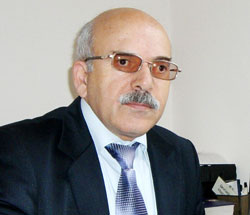 On April 22, 2014, the Serious Crimes Investigation Department of Prosecutor General’s Office launched a criminal case to investigate the activities of several local and international NGOs. A number of human rights defenders (Intigam Aliyev, Rasul Jafarov) were arrested as part of the case, and the bank accounts of more than 30 NGOs and human rights defenders were frozen. The offices of some NGOs were searched and equipment was confiscated. NGO leaders, including Annaghi Hajibayli, were banned from leaving the country.

On October 2, 2015, Hajibayli was informed in writing that the investigation related to the Azerbaijani Lawyers Association had been completed, and that the criminal case was being discontinued. However, nine months later, the bans have not been lifted.

Khalid Bagirov noted that the examination of the complaint had been delayed for more than two months due to the non-appearance of the Prosecutor General’s Office representative.

“This time, the hearing was held without the participation of the representative of Prosecutor General’s Office. During the closed hearing, Judge Shalala Hasanova declined to accept the complaint, arguing that the case needed to be heard by an administrative court, not a district court,” said Bagirov.

Court Does Not Allow Khadija Ismayil to Leave Country