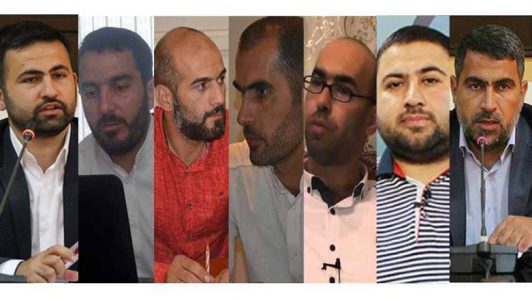 > Defendants Vusal Alish and Seymur Hasanov testified and recounted how they had been tortured after their arrest.

Defendant Vusal Alishov gave a testimony and spoke about the tortures inflicted on him following his arrest. “I was detained when leaving home on 30 November, four days after the incident that happened in Nardaran on 26 November 2015. As I left home and was waiting for the lift, I saw six men in civilian clothes looking at me strangely. They asked me if I was Vusal. I said yes. They put cuffs on my hands without introducing themselves or showing any document. They entered my house together with me. After fifteen minutes of search, they brought a bag and said ‘this weapon was found under the mattress in your bedroom’. The persons, who searched my apartment, were operatives of the Main Organised Crime Department (MOCD) Teyyub, Muzaffar, Jeyhun, Rovshan, Hatam and Mirza, whose names I learned later. I said ‘God damn him who put these weapons there’. They took me away handcuffed before the eyes of my four-year-old child. They were insulting me on the way. At the Department, I felt my heart ache. I have a heart condition and I am on medication. I asked them to take off the handcuffs, but they did not. They told me to sign a document that allegedly my house had been searched with my consent. I did not agree. They said ‘do not mistake MOCD for a police office. We have broken a lot of self-confident people. We have received the order from above. We even emasculate. We extract any statement from anyone. No one can call us to account. You have two options: either you sign voluntarily, or we will torment you into signing in the end’. I was shocked. As if, I was in Armenian captivity. I unwillingly signed. They took me to the cellar of the Department, the temporary detention place. They kept six people in an area of 28-30 square metres down there, and it was stuffy. The airlessness was suffocating me. I asked for a medication and they gave. I then asked them to take off the handcuffs. Karim Alimardanov said ‘no, we cannot. We are an anarchic Department. We have received the order from above. They will give us honorary titles for our operation in Nardaran’. They exert strong psychological influence on people there. They said ‘We wanted to frame Taleh Bagirzade with drugs, but he made wrong speeches during the Ashura (mourning ceremony of Shia Muslims) and we were forced to devise the scenario of the Nardaran operation’. They told me that we wanted to overthrow the government together with the National Council, its chairman Jamil Hasanli and Azerbaijan Popular Front Party (APFP) chairman Ali Karimli. Karim Alimardanov showed me a baton and gave a warning. He said ‘We have masked men. We can bring your family here. We have received the order from such a place that there is no other choice. No one can save you. We have made everyone sign, here’. I saw how they took the detained people, beat them and poured faeces on them. For the sake of my family, I signed the documents they wanted. I knew that I would be able to say everything in court. All my statements provided during the investigation are false. I was forced to sign them. I do not confirm them.

I was held in MOCD for 28 days. During that time, my family did not know where I was. If not for medications, I would have suffered a heart attack twice. The guards were not supposed to sleep at night, but they slept. They called us names when we asked for medications. To have such an agency as MOCD in Azerbaijan in the 21st century is a disgrace. A lot of people have been pressured there. In the criminal world, they say ‘do not ask many questions to those who have got out of MOCD, because their dignity has been badly humiliated’. MOCD has been founded by Isgandar Hamidov (former Minister of Internal Affairs), who himself ended up there later. I hope those who did this to us also end up there. We saw humans when we were transferred to the detention centre. To date, I have written 420 appeals. I filed a complaint with Nasimi District Court over the illegalities in MOCD, but their responses to all of my appeals were pro forma. If a criminal case is ever launched regarding MOCD, then its staff should be charged under most articles of the Criminal Code. History will judge them,” the defendant said.

Vusal Alish went on to speak about the reasons for his arrest. “Upon my transfer to the detention centre, seeing me, the warders said ‘Just look what kind of times we are living in that, you have also been arrested’. In fact, our arrest is symbolic. In Azerbaijan, courage, manliness, dignity and honour have been arrested. We have been arrested due to moral values. This will happen to all honourable people out there in this country. There are some forces in the country, which have enmity towards the people and want to see the people in an undignified state. I have appealed to Madat Guliyev in connection with MOCD. Let their activity be investigated to see which foreign intelligence agency they are working with that they are waging this hostility towards the people. There is no free space in the cells. They put 20 people into a 6-man cell. Those working for MOCD are worse than Armenians. If they wanted to arrest Taleh Bagirzade, why then did they keep Nardaran under blockade for three days? This is a national and moral genocide against the people.

I know the public prosecutor will ask me whether I know the Muslim Union Movement or Taleh Bagirzade. Let him not bother. I am a member of the Muslim Union Movement and I know Taleh Bagirzade. He is an intellectual and patriotic person and scholar. If only all people were like him. He has a great role in the protection of moral values, which are the backbone of this country. Bagirzade and others are sitting in jail at the cost of their lives and blood. Bagirzade has three children. He could have also travelled in a service car and lived a rich life, but he said ‘it is alright if I struggle as long as moral values are protected’. We think about the people. God has chosen us as mediators. We are the victors in all cases because God is with us,” the defendant said.

Afterwards, a break was announced in the hearing. After the break, defendant Seymur Hasanov testified. He also noted that he had signed his investigation statement under duress. “Everything written in the statement is a lie. I do not confirm any of them. At MOCD, they took me to Karim Alimardanov and forced me into signing the documents. Karim Alimardanov demanded that I say I had obtained the weapon from Taleh Bagirzade so they filmed it with the camera. I refused and they tortured me,” Hasanov said.

While answering questions, Hasanov said he was a member of the Muslim Union Movement and knew Bagirzade from his speeches in the mosque. He noted that Bagirzade’s speeches were on religious and moral values and he had never made speeches against the state. The defendant said the weapons had been planted on his apartment by MOCD officers. He added that he had been intimidated and subjected to indecent acts at MOCD.

Defendant Elchin Gasimov said he had suggestions for members of Milli Meclis (Parliament). “In September 2015, I was invited to the last congress of APFP, where I made a 6-minute speech on religious subjects. The video of my speech was disseminated on the internet. MOCD operative Shahlar Jafarov brought my congress speech and showed it to Karim Alimardanov. They inflicted torture on me by watching the 6-minute speech. A 6-minute speech seemed like 6 centuries to me. I thought to myself ‘thankfully I did not speak for 36 minutes, or else they would kill me’. Is it a violation of law to speak at an event of a registered political party? At Sabunchu District Police Department, they were telling me ‘You are a Bakuvian from Mashtaga settlement. Why do you go around speaking of law? You should go and plant your greens’. I have a suggestion for MPs. Let them pass a law that Bakuvians can only plant greens, although the officials have already monopolised the greens [market] as well. They are telling us that we were planning a coup together with the National Council and the APFP. At MOCD, they told me ‘Testify against the APFP and the National Council, and you’ll be freed under a 3-year suspended sentence’,” Gasimov said.

Gasimov then turned toward presiding judge Mayil Bayramov and said ‘I wish you’d stop the proceedings. None of us is guilty. Someone needs to lay the foundation of justice in the country. Stop the proceedings, and you’ll go down in history as a glorious person. Prove that it is possible to build a just society in Azerbaijan’.

The presiding judge announced that the hearing will continue on 10 March.

Background: Muslim Union Movement deputy chairman Elchin Gasimov was arrested on 5 November 2015. He was initially charged under Article 310 (wilful disobedience to lawful requirements of a police officer) of the Administrative Violations Code and was sentenced to 30 days in jail. Afterwards, the criminal case was initiated against him and he was arrested. He and his co-defendants were charged with terrorism; incitement to terrorism; incitement to active disobedience to lawful demands of the representative of authority, riots and violence against citizens; illegal acquisition, transfer, selling, storage, transportation and carrying of firearms, accessories and ammunition as an organised group; violent seizure or retention of power; formation of armed groups not provided for in the legislation; making open appeals against the state; instigation of national, racial, social or religious hatred and hostility as an organised group; forgery, illegal production and selling of official documents, state awards, seals, stamps and forms, or knowing use of fake documents; hooliganism; and, resistance or use of violence against the representative of authority.

Muslim Union Movement chairman Taleh Bagirzade was arrested during an operation conducted in Nardaran on 26 November 2015. Bagirzade stood trial in Baku Grave Crimes Court along with 17 other men including APFP deputy chairman Fuad Gahramanli. On 25 January, the Court sentenced Bagirzade to 20 years, Gahramanli to 10 years, and others to between 10 and 20 years in jail.

Journalist to Remain in Pre-Trial Custody for another Three Months