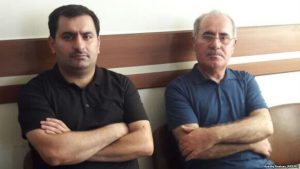 The life of Rufat Safarov, the former investigator sentenced to 9 years in jail by the decision of Baku Grave Crimes Court, is in danger.

Safarov’s father Eldar Sabiroglu said the following in a statement disseminated on 5 January. “Apparently, Rufat Safarov’s resignation in protest against the corruption and lawlessness in the legal system has seriously angered the authorities. It is due to this anger that they are filled with an increasing sense of vengeance. They are using different means of psychological pressure against Rufat. You just have to say, do whatever you do, just don’t choose to fight against the government. It is obvious from the case of the former investigator that severe punishments await those who take up the fight for truth and justice.”

Sabiroglu further expresses his concern over the fact that Rufat Safarov is yet to be transferred to prison. “Rufat is subjected to harassment and pressure at Baku Detention Centre №1. A new person has been put into his cell. Although his new cellmate originally told him that he had served 2 years in prison, Rufat was suspicious of his actions and looked into his sentencing. Rufat found out that this person is an especially dangerous career criminal, and has served 25 years in prison. When Rufat asked him why he was hiding his criminal history, he said the deputy chief of the detention centre for the regime had instructed him to not speak about his conviction record.”

According to Eldar Sabiroglu, they are either plotting to endanger Rufat’s life or want to provoke an incident in his cell and thus launch new investigations against him to punish him once again.

In his statement, Sabiroglu’s father said, “I contacted the hotline of the penitentiary service in regard to this, and expressed my objection. Colonel Mehman Sadigov, Head of Public Relations Department of the Ministry of Justice, phoned me and told me to not worry saying that he would inform the leadership about the issue. As a former colleague, I believed him and decided not to make a statement. Today, I received information that the same especially dangerous career criminal still remains in the same cell as Rufat, and is harassing Rufat with his violent criminal jargon. I am seriously worried about my son’s life, and ask the leadership of the Ministry of Justice to take urgent steps to rectify this unlawful situation.”

Rufat Safarov, the son of former head of the press service of the Ministry of Defence, resigned from the post of investigator of Zardab Regional Prosecutor’s Office by writing an application to Prosecutor General Zakir Garalov in December 2015. He stressed that he did so in protest of the rampant injustice in the country and unjustified attacks against his father.