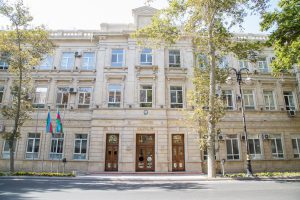 ➢ Vidadi Zeynalov: “We should not be treated as nobodies, ok?”
➢ The former Chief of Staff of the Ministry of Communications and High Technologies (MCHT) claimed that the figures in the indictment bill had been inflated, and demanded an additional forensic examination;
➢ Lawyer Jeyhun Yusifov asked the court to conclude the review of the primary witnesses and to summon other witnesses for testimony.

At today’s hearing, witness Mikayil Babayev testified. He introduced himself as the chief engineer of Sabunchu Telephone Exchange who had previously worked in the same capacity for Khazar District Telephone Exchange from 2007 to April 2015. Babayev confirmed his investigation statement, which mostly read that requests for quotations had been conducted to contract works out, but the winners of those requests for quotes typically were Baku Communications Repair & Construction LLC, Construction, Repair & Supply Service LLC, Communications Civil Construction LLC and Communications Repair & Construction No.3 LLC, which belonged to BTCPA Director General Beytulla Huseynov and his close acquaintance Bayram Valiyev. Babayev noted that the requests for quotes conducted by the telephone exchanges had been pro forma. “The companies that won the requests for quotes had been pre-determined by Beytulla Huseynov. All repair and construction works were implemented by the companies specified by him. The funds were transferred to the accounts of the construction companies and then misappropriated by the Director General of the Association and his companions by exaggerating prices,” the witness said.

After that, the judge declared that seven people recognised as witnesses in the case had sent telegrams to the court stating that they would not be able to attend the trial due to health problems and confirmed their investigation statements.

Vidadi Zeynalov protested against this. The judge noted that as the witnesses were unable to come to the court, their statements had to be read out, as prescribed by law. “But if you suggest that the witnesses must be questioned in person, then we will have to ensure their presence in court in all circumstances. It is your right to testify or not. If you refuse to testify till the end of the judicial investigation, then your investigation statement will be mandatorily read out,” the judge said.

Vidadi Zeynalov replied that he would not testify as long as the auditors of the Ministry of Finance were not interrogated. “The charges against me are based mainly on the opinion delivered by them. They have incredibly overstated the figures. I have to touch upon this issue during my speech. Therefore, I kindly ask you to invite and question them in court,” Zeynalov noted.

“The opinion issued by the auditors of the Ministry of Finance will be studied at the next hearing, as part of the examination of the documents. Only after that, it will be possible to question them as additional witnesses, if necessary. We can discuss this question then. And you, during your speech, can provide an explanation regarding the part where you believe those figures have been exaggerated,” the judge responded.

Vidadi Zeynalov asked the court to discuss the motion filed by him. The other defendants and lawyers also supported his motion.

Public prosecutor Farid Nagiyev, however, remarked that it was against procedural rules to grant the motion at that stage. “For additional witnesses to be examined, the questioning of the primary witnesses needs to be finalised first. Therefore, I protest against the consideration of this motion at the current stage,” Nagiyev said.

Lawyer Jeyhun Yusifov raised an objection to the public prosecutor’s view. “The figures in the opinion rendered by the auditors form the basis of the indictment. The attorney knows well that those numbers have been inflated and are unfounded. That is why he wants the Finance Ministry employees to not come to court,” the lawyer commented.

Farid Nagiyev responded that lawyers do not have a right of reply after the prosecutor’s speech. “But, I want to bring to your notice that I did not object to their examination. I just pointed out that doing this at the current stage is not in line with the procedural legislation,” he added.

Lawyer Jeyhun Yusifov filed a new motion. He noted that 170 of the 205 witnesses had already been questioned. “Only 35 witnesses are left. All of them are prosecution witnesses. Although their statements are against the defendants, we request that those comments be considered announced. Right now, the important thing for us is the examination of the auditors of the Ministry of Finance. On this ground, I kindly request that the examination of the primary witnesses be completed,” Yusifov said.

At that point, the judge stressed that, at the next hearing, Vidadi Zeynalov would be asked to testify for the last time. Otherwise, his investigation statement would be read out.

Vidadi Zeynalov objected. “I have questions to ask the employees of the Ministry of Finance. I requested this issue be looked into during the investigation, too. How can you brush aside the fates of so many people? We should not be treated as nobodies, ok? The forensic examination has to be conducted over again. It should be clarified how the figures mentioned in the indictment bill have been arrived at,” the defendant said.

The judge reiterated that the court gave time to Vidadi Zeynalov, and, unless he testified yet again, his investigation statement would be declared and accepted [as valid]. The lawyers protested at the trial being protracted. “So many people have gathered here. Eleven defendants have been brought. But only one witness testifies. It is tantamount to unnecessarily prolonging the trial,” the lawyers objected.

NIDA Member Rahim Valiyev Released Having Served out His Sentence