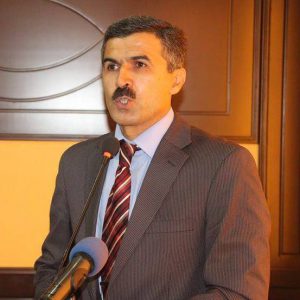 Human rights defender, Civil Society Platform member, former prisoner Ogtay Gulaliyev is at a risk of being arrested, he writes on his Facebook page. According to the human rights defender, unknown men in civilian clothing have been spying on him and his home in recent days.

Gulaliyev’s Facebook message reads as follows. “This surveillance and spying activity has further intensified following the attempts to extract a statement against the National Council leadership, prominent writer Zumrud Yagmur and me from Taleh Bagirzade supporter social activist Ahsan Nuruzade who was kidnapped on 24 January 2017 and secretly held and tortured at the Main Organised Crime Department (MOCD) of the Ministry of Internal Affairs, and after the MOCD labelled us as traitors to statehood.

To tell the truth, I had already been under surveillance activities before. But, those activities were not so intensive, and also I considered that monitoring to be “in line” with the court decision since, as you know, Sabirabad district court changed my pre-trial detention measure to police supervision on 13 June 2012. Now this decision has been annulled. But the surveillance has intensified. After all, when I was invited to MOCD on 14 October 2016, they openly told me ‘we watch all your actions and writings’. At that time, they warned me to stop ‘presenting the individuals arrested by the government to the public as angels, declaring them political prisoners and defending them’.

I have served an illegal jail sentence once. I am not willing to step back from the path that I consider right, the road of defending illegally arrested people whose rights have been violated, even if this path leads to my arrest. If they are going to arrest me for this, I am ready! Let them know that they cannot intimidate us with such surveillance activities and psychological pressure.

Finally, I should emphasise that I do not use guns or drugs, and do not have such things in my house. I do not have intentions or the means to establish or finance illegal military units. I am for a public and democratic change of power in Azerbaijan. I express all my thoughts by the law and ethics!”