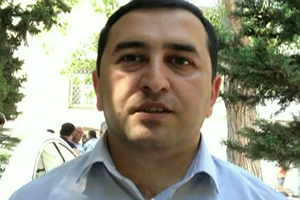 Bashir Suleymanli: This is yet Another Instance of Government Crackingdown on Civil Society

“Yesterday,my father was taken to the police office in Yevlakh city where heresides.The police chief asked him questions about my Nowruz holiday trip my close relatives, and asked my phone and car plate numbers.Because of the regularity of such interrogations causing health-related discomfort , I was forced to make the issue My mother has fallen ill with diabetes due to these pressures andhas undergone I am not worried by persecutions. f someone has concernsover personallyme to account. But in case of any change in my parents’ life, the responsibility for this will lie with the authorities,” Suleymanli noted.

He assessed the happenings Viewing the around individuals engaging in socio-political activity as ‘completely unlawful’, Suleymanli underlined that he had informed international human rights organisations and embassies in this connection.

Background: Bashir Suleymanli, the former executive director of the Election Monitoring and Democracy Studies Centre (EMDS) Public Association, was sentenced to 3.5 years injail by Baku Grave Crimes Court’s judgmenton 26 May 2014. He was released under the president’s pardon decree on 18 March 2015.

Head of EMDS Anar Mammadli, who was sentenced to 5.5 years in jail under the same judgment,was also released under a pardon decree in March 2016.

Local and international human rights organisations considered their arrests politically motivated and declared that they were jailed for engaging in election monitoring.

Second Nardaran Case: Defendant complains about the different treatment of foreigner, Lapshin compared to the harsh treatment they receive