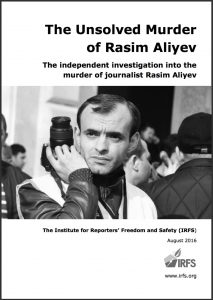 On the first anniversary of the brutal murder of journalist and human rights defender Rasim Aliyev, IRFS calls on the Azerbaijani authorities to thoroughly investigate the case and rigorously pursue all suspects potentially involved in Aliyev’s death, including the medical staff of City Clinical Hospital # 1 and police. IRFS has released a report titled The Unsolved Murder of Rasim Aliyev , which provides clear evidence that not all guilty parties have been brought to justice and details the numerous unanswered questions.

For months, concerns have been mounting over an apparent lack of political will to bring the guilty parties to justice.

“We are gravely concerned that a year after the barbaric murder of our colleague Rasim Aliyev, not only do those responsible for his death remain unpunished to, but the situation for freedom of expression has deteriorated even further, with Azerbaijan facing a controversial referendum next month,” said IRFS CEO and founder Emin Huseynov.

Based on the research and analysis conducted by the expert group established to investigate the journalist’s death, there are strong grounds to conclude that the murder was politically motivated.

“Our independent investigation into Rasim Aliyev’s murder demonstrates that the case is not closed. We call on the authorities to launch a new investigation; to immediately bring the medical personnel and police officers involved to justice; and most importantly, to focus on Aliyev’s professional activity as a motive. Investigators have an obligation to identify and apprehend all suspects in this barbaric crime, including the mastermind,” added Huseynov.

The journalist had received threats via a social networking website for his journalistic activities prior to his death, on July 25 2015, which he reported to law enforcement agencies. Unfortunately, officials failed to take action to ensure the journalist’s safety. However, this was never investigated by the investigative agency or the court, and those police officers have eluded punishment.

Furthermore, IRFS emphasizes that the doctors involved in Rasim Aliyev’s death have also escaped punishment. Rasim Aliyev did not receive adequate medical care during his 8-9 hours in hospital. Although the initial examination showed fluid in his sinuses, the journalist was not examined for a second time. Despite his fractured ribs, even the simplest medical intervention – fitting a brace – was not performed.

It should be noted that prior to Rasim Aliyev, journalist Rafig Tagi also mysteriously died in City Clinical Hospital #1 in 2011. Tagi, hospitalized after a stabbing attack, survived a surgical operation and even gave an interview afterwards; however he died later. The criminal proceedings into Rafig Tagi’s death have been halted. Nor have the murderers of Elmar Huseynov been apprehended. The government is not interested in solving the crimes committed against journalists, a pattern that has been repeated in the case of Rasim Aliyev.

“The timing of Rasim Aliyev’s assault was no coincidence. He was beaten on the one year anniversary of the raid on IRFS. Rasim Aliyev was one of the people who helped me to avoid illegal criminal prosecution. Rasim’s murder is politically motivated. He was threatened and I believe they used his Facebook post as an opportunity to carry out his killing,” stated Emin Huseynov.

“Our own investigation into the murder of Rasim Aliyev is not over. We will continue investigating all the facts and circumstances until we know the truth”, Huseynov said. Another possible motive could a link to the Sport for Rights campaign, IRFS’ report suggests. “Increasingly frustrated with PR attempts gone awry, the authorities might be seeking revenge against the Sport for Rights campaign. The fact that the attack on a human rights defender and journalist was perpetrated by a group of athletes just after another prominent journalist and Sport for Rights campaigner, Emin Milli, received a chilling message from Azerbaijani Sports Minister Azad Rahimov, suggests a possible connection between the murder and the campaign”, the report reads.

IRFS calls on the government to fully investigate the murder of journalist Rasim Aliyev, to punish all those involved in the murder, and to eliminate the climate of impunity for violence against journalists in the country.

IRFS also calls on the international organizations, including the OSCE and Council of Europe, to urge the government of Azerbaijan to fulfill its obligations towards media freedom and to conduct full and fair investigations into the crimes against journalists.

The Unsolved Murder of Rasim Aliyev