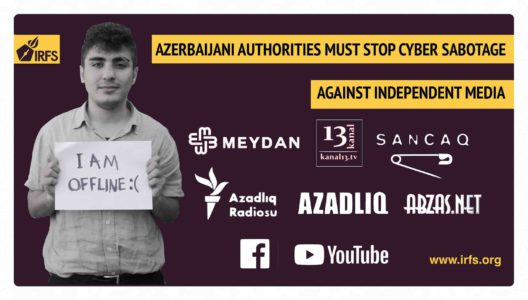 The Institute for Reporters’ Freedom and Safety (IRFS) condemns the authorities of Azerbaijan for organizing a series of cyber attacks directed at the Facebook accounts of independent media outlets and opposition leaders, and calls for an end to the systemic intensification of online censorship that has targeted the public pages of leading independent online media outlets and opposition leaders over the past month.

In particular, the latest attack that hacked the accounts of Facebook page administrators on January 29 resulted in the official page of the independent Azerbaijani online publication Meydan TV being temporarily hijacked. Although the media outlet regained access to its page after 12 hours, the hackers had already managed to permanently delete all publications of the news resource from the last 5 years. The attackers also managed to forcibly unsubscribe about 100,000 subscribers accounting for 20 percent of the lost subscriber base. Over the last month, the Facebook page of the independent news resource Kanal13 and the pages of opposition leaders Ali Karimli and Jamil Hasanli suffered almost identical attacks. Another critical Facebook page named “Made in Azerbaijan” has also faced a similar problem recently; but in addition to the loss of all published content and most of the subscribers, video blogger Mahammad Mirzali – a France-based political exile who has founded the page – was demanded by Azerbaijani law enforcement agencies to stop critical publications about Azerbaijani President Ilham Aliyev and threatened with the prolongation of the illegal detention of his two close relatives, who have effectively been taken hostage, in case of refusal. Furthermore, unknown persons publicly threatened Muhammad Mirzali himself with physical violence in France, where he has permanent residence.

“The aggressive actions by the authorities aimed at strengthening online censorship suggests that they are seriously concerned about the upsurge of critical thinking among the population, who – with the help of social networks – have rapidly gone beyond their control,” IRFS CEO Emin Huseynov said. “After completely eliminating the independent television and radio broadcasters and classical independent print media in recent years, the authorities started for the first time to use judicial and extra-judicial means to block access to the websites of independent publications since the middle of last year. In parallel with the introduction of technical restrictions aimed to strengthen self-censorship on the Internet, the authorities arrested two most prominent online critics in Mehman Huseynov, the author of anti-corruption blog Sancaq Production, and Aziz Orujov, executive director of Kanal13 online television. Seeing that the arrests of well-known online journalists and even the mysterious death of jailed activist-blogger Mehman Galandarov could not contain the spread of critical thinking and that in response to the blockage of access to their websites, many independent online media resources have successfully promoted their content through social network services such as Facebook, Instagram and Youtube, the Azerbaijani authorities developed and implemented a series of identical cyber-sabotage attacks against leading critical voices on the Internet,” Huseynov concluded.

IRFS is concerned that the authorities of Azerbaijan, who since the autumn of last year started for the first time to shut down Internet connection during peaceful opposition protests ahead of the October 2018 presidential elections with the aim of maximally preventing the exchange of critical information, can go on to entirely block access to popular social networks and messengers.

IRFS calls on the international community to immediately start exerting pressure on the Azerbaijani authorities through individual sanctions imposed against the officials and their family members, who are responsible for blatant restriction of freedom of expression in the country.

As a member of the Global Network Initiative, IRFS calls on its partners in this coalition, in particular Facebook and Google, to help investigate all abovementioned cyber attacks and provide assistance to the affected alternative media resources in recovering the deleted content and forcibly unsubscribed followers.