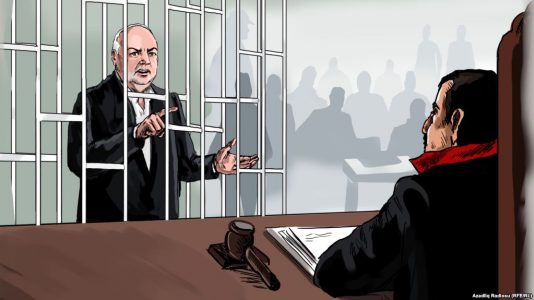 > The businessman noted that he had filed a civil claim of more than AZN 1 million against the defendants for being forced to pay money at the MNS on several occasions and various pretexts.

Speaking to journalists after the hearing, Akif Chovdarov’s lawyer Sadig Rasulov said Real HCC’s currently jailed chairman, the victim in the case Ilham Gasimov had been brought to the hearing.

Note that, Ilham Gasimov has been sentenced to 15 years in jail by Baku Grave Crimes Court, which found him guilty of defrauding prominent poet and businessman Gulaga Tanha (Gambarov) of his AZN 13.5 million. Later, the Court of Appeal reduced his jail term by 2 years.

Ilham Gasimov confirmed his investigation statement while being questioned in court. He testified that children and women were frightened during the operation in the restaurant. “The black masked men entered the hall. Women and children were scared,” he said.

While answering the lawyers’ questions at the hearing, Ilham Gasimov could not answer the question on whether there were videotapes from that wedding. According to him, the MNS officers took and destroyed the videotapes afterwards.

According to the lawyer, there were contradictions in Ilham Gasimov’s testimony. Therefore, his investigation statement was read out.

Ilham Gasimov’s investigation statement read that a person, whom he did not know, called him in 2007 and said ‘your brother Islam and Tahir are at the MNS, Akif Chovdarov wants to see you’. He quoted Chovdarov as telling him that his brother was making apartment sales in USD and would be arrested because of that. Chovdarov demanded USD 500,000 of him in return for his brother’s release.

Gasimov’s statement further read that next time the MNS officers came to his HCC’s office on Khan Shushinski Street in the winter of 2009 and took him to the MNS along with the documents of his company. At the MNS, Chovdarov angrily told him that he had swindled a man by name Rauf of USD 150,000. Chovdarov told him that Rauf was a close friend of Eldar Mahmudov. Gasimov’s assertion that he did not know the person by name Rauf was of no use. According to Gasimov, he was made to pay another 250,000 on this pretext.

According to Gasimov’s statement, his son was abducted in September of 2015. The businessman claims that Chovdarov told him that his son was using drugs and demanded 300,000 of him, and they eventually wrested 50,000 from him.

On 14 September 2015, Gasimov’s friends Tofig Ibrahimov and Namig Orujov were participating in a wedding ceremony in Sofia restaurant. According to Gasimov, Tofig Ibrahimov has a business in Moscow and is a Russian national. He had further stated that a number of armed MNS officers twisted

Namig’s arms and pinned him to the floor on the wedding day: “They beat and handcuffed him. They also took Tofig’s car parked outside the restaurant and his driver Gulaga to the MNS. Later, Tofig called his friend Akif Mustafayev (known for his nickname ‘Shark’ and as one of the most loyal men of former minister of national security Eldar Mahmudov).”

According to Gasimov, at the MNS, they demanded USD 1 million of Tofig. Eventually, Chovdarov wrung USD 300,000 from Tofig and USD 100,000 from Namig Orujov.

Chovdarov’s lawyers said Gasimov’s testimony was inconsistent with his statement and asked him questions in that regard. He responded to questions by saying ‘I do not remember’.

Sadig Rasulov further stated that Ilham Gasimov claimed to have personally spoken to Chovdarov on the phone. “He says they had talked, but the materials of the criminal case show no phone talk with the numbers in Ilham Gasimov’s use until 2015,” Rasulov said.

The lawyer also underlined that the testimony of Ilham Gasimov’s former driver Elshan also had contradictions. “I twice went to the MNS together with Mr Ilham Gasimov in 2009 and 2010. At the time, the money was ready in the car beforehand. Mr Gasimov took the money to the administrative building of the MNS,” the lawyer quoted the witness saying.

It was also announced at the hearing that Ilham Gasimov had filed a civil claim of more than AZN 1 million against Akif Chovdarov and others.

The proceedings will continue on 10 April.

It should also be noted that MNS General Akif Chovdarov has filed a lawsuit against the Ministry of Labour and Social Protection of Population. In his lawsuit, he sought to be sent a fact sheet from the Department for Work with Military Personnel and Persons with Special Ranks of the State Social Protection Fund under the Ministry and to be granted pension. The case was considered by Baku Administrative Economic Court #1 and the proceedings in the case were suspended.

Chovdarov has appealed this decision to a higher court. The appeal will be heard under the chairmanship of Judge Mirza Tagizade of Baku Court of Appeal on 5 April.