Journalist and Citizen Whose Problems He Publicised Convicted on Defamation Charges 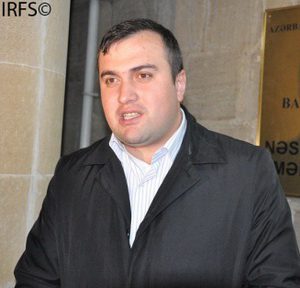 On 25 November 2016, Sumgayit City Court handed down one-year jail sentences for realliq.info online news site Editor-in-Chief Ikram Rahimov, and a private citizen called Rahman Salman oglu Novruzov. Novruzov had turned to the journalist with his story after the state authorities failed to properly investigate his complaints. The two were convicted under Article 147.2 (libel that involves accusing someone of a serious or especially serious crime) of the Criminal Code, reported lawyer Elchin Sadigov.

According to the lawyer, the court dispute stemmed from an article published on realliq.info, which told the story of how the En Ujuz (“The Cheapest”) shopping centres had evaded taxes (confirmed by relevant documents from the Ministry of Taxes), and were closed down by Sumgayit City Executive Power chief Zakir Farajov – but later reopened after paying a bribe to Farajov.

Vugar Galandarov, the head of the En Ujuz shopping centres, has brought the private prosecution before the court.

The lawyer noted that he met with journalist Ikram Rahimov in Detention Facility No.3 on 30 November.

“Ikram Rahimov was illegally held in Sumgayit City Police Department for three days. He was tortured in the office of Deputy Chief of Operations Hikmat Gasimov. They demanded that he apologise to Zakir Farajov in a real time video call. When he refused to do so, they put a strong-smelling cellophane bag over his head until he could not breathe. Then, they once again demanded him to apologise. Rahimov maintains that everything was happening via live video chat, i.e. Zakir Farajov was watching him on the other end.

Afterwards, three men were brought to the police office and forced to testify against my client. They repeatedly put the cellophane bag over his head, and unable to withstand the torture anymore, he knocked his head against the back of the chair and injured his left temple. Only then did the torture cease. They kept him in Sumgayit City Police Department until his wound completely healed, and then sent him to the detention facility,” said the lawyer.

Sadigov added that he would be appealing to the Prosecutor General’s Office in connection with the torture allegation.

Argument Breaks Out During Nardaran Trial