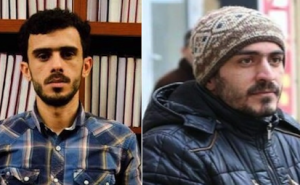 Elnur Mukhtar, a photo reporter collaborating with Meydan TV, has been detained. In the morning hours, the police searched Elnur Mukhtar’s apartment, after which he was apprehended. The journalist’s photo camera and laptop were seized during the search. The journalist himself was sentenced to 10-day administrative imprisonment.
In addition to the journalist, NIDA civic movement member Amid Suleymanov has also been detained. According to his father Yusif Suleymanov, the youth activist has been sentenced to 10-day administrative arrest. But the reasons for the punishment have not been disclosed.
Amid Suleymanov was taken from his apartment today. His father says since last night different men came to their apartment and asked about other people, saying there was a complaint. “They told us to open the door and they would just have us sign a document and then leave. I reported it to 102 [hotline] three times, and then opened the door. A police officer and 5-6 plainclothesmen rushed in. They seized Amid’s computer and phone and searched the home. After that, they took Amid and left,” Yusif Suleymanov said.
According to the information Meydan TV received from law enforcement agencies, Elnur Mukhtar was taken to Baku City Main Police Office. Elnur Mukhtar, along with NIDA Civic Movement member Amid Suleymanov, were reportedly chanting the words “Happy Slave Holiday” inscribed with spray paint on the late Azerbaijani president Heydar Aliyev’s statue facing the Central Bank located near 28 May metro station on May 09, 2016, when they were caught on the cameras in the area, and they were detained for this reason.
Recall that, NIDA civic movement members and final-year students of Baku Slavic University, Giyas Ibrahimov and Bayram Mammadov were arrested on drug charges, after the youth activist Giyas Ibrahimov spray-painted the words “Happy Slave Holiday” and “Fuck the system” on the late Azerbaijani president Heydar Aliyev’s statue facing the Central Bank located near 28 May metro station, and Bayram Mammadov took a photo of the writings and shared it on Facebook social network.