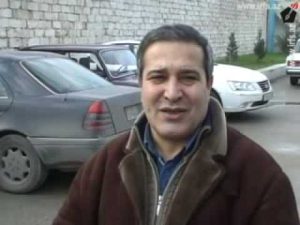 The journalist had a surgery in City Clinical Hospital #1, and his treatment is ongoing.

Faramaz Novruzoglu told IRFS that he suspected that the attack could have been provoked by his Facebook posts. “I have been writing posts about religion on Facebook. I have received threats over my posts on Facebook, on two or three occasions. The assailant might be a member of some religious sect. He wanted to stab me in the heart, but it caught my arm as I extended it forward to shield myself. He dealt the second blow to my kidney. The police officers in the area brought me to Clinical Hospital #1. I was operated on. They have launched a criminal case on the incident on charges of causing severe damage to health, and the culprit has been arrested,” the journalist said.

Faramaz Novruzoglu added that they would arrange him a confrontation with the assailant.

Background: Journalist Faramaz Allahverdiyev was arrested on April 17, 2012. He was convicted under Article 220 (incitement of riot) of the Criminal Code over his social network statements and also Article 318 (cross border unlawfully), and was sentenced to 4.5 years in jail. He was released under a presidential pardon in May 2014.