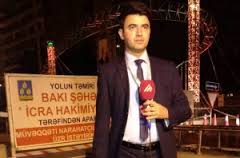 APA-Holding employee Farahim Ilgaroglu has reported being sacked after his viewpoint on the National Council rally of September 11 did not coincide with that of Eynulla Fatullayev, the editor-in-chief of the websites virtualaz.org and haqqin.az.

“Eynulla Fatullayev posted a photo (showing 5-10 people) taken before the start of the September 11th rally and claimed that the National Council ‘suffered a fiasco’. I uploaded a photo showing more rally participants on the comment section under the post in question. After that, Eynulla Fatullayev wrote a comment to me asking ‘do you work for APA or APFP?’ I replied that it was an irrelevant question and that I was fulfilling my professional duty as a journalist. After that, the correspondence was sent to the Presidential Administration and I was dismissed by APA-Holding. They told me that they had allegedly received an instruction from the Presidential Administration to sack me,” the journalist said.

Virtualaz.org and haqqin.az editor-in-chief Eynulla Fatullayev said he had not complained to the Presidential Administration against Farahim Ilgaroglu. “My discussion with Farahim Ilgaroglu on the social network was public. He visited my page and put up a comment supportive of the opposition. I asked him to what extent he was morally right as an employee of a pro-government organisation by supporting other forces. It was not a private correspondence to claim that I forwarded it somewhere. It was an open discussion on the social network. As for his dismissal, I am not part of APA’s management and do not have any contacts with them. It seems that APA’s management watched this discussion and made the decision in question. But there has been no initiative on my part,” Eynulla Fatullayev said.

Background: On September 11, the National Council of Democratic Forces organised a rally of protest against the upcoming constitutional referendum in Sports and Health Complex stadium (former Mahsul Stadium) in Yasamal district of Baku. The rally held under the slogan “No to Monarchy, Stop the Pillage” attracted more than 10,000 people. The following demands were put forward in the resolution of the rally: cancel the anti-democratic referendum; conduct political reform; ensure the independence of the judiciary; conduct radical reform to get the country out of the crisis; increase the payroll and pensions in accordance with the devaluation of the national currency manat and the price rise.