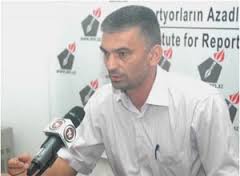 On October 7, Gundam Khabar newspaper editor Shirin Jafari was detained by the police, his wife told the Institute for Reporters’ Freedom and Safety (IRFS).

“Our house was searched, and the police officers left taking Shirin Jafari with them. They did not say where they were taking him,” the journalist’s wife said.

The journalist was released a few hours later. Regarding the reasons for his detention, Shirin Jafari said he had been summoned over an article about Azerbaijanis’ villas in Ukraine published in the latest edition of Gundam Khabar. “I was told at the police department that I had been reported by the persons named in the article. They asked me questions about the article, but did not treat me rudely or make any warning,” the journalist said.

Shirin Jafari was handed a 4.5-year suspended sentence on 12 April 2016, under Article 306.2 (non-compliance with a verdict, decision or another act of the court; committed by an official) of the Criminal Code, a charge brought against him by the Investigation Department of the Ministry of Justice on 23 October 2015 for his failure to fully pay off his tax debt levied against him as part of another criminal case initiated in 2013.