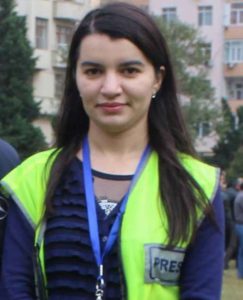 The parents of Meydan TV contributor Sevinj Vagifgizi have been summoned to the 6th police station of Binagadi District Police Department, as reported by the journalist herself.
According to Vagifgizi, her parents have been summoned over participation in National Council’s September 17th rally against the referendum.

“My mother and father have been summoned to the 6th police station of Binagadi District Police Department. Today, district police officer Jalil Abbasov approached my mother and told her to appear in the police station together with her husband. My mother has participated in National Council’s protest rally held on September 17. I suppose that my father has been summoned in order to accompany my mother. I asked the district police officer if they were inviting my mother due to her participation in the protest rally, he did not deny. He said ‘let her come to the police station and we will talk’. I demanded that they send a summons to our home, and only then we would come over. He said there was no need for a summons as he had come in person. As I still insisted, he said they would come to our home together with his colleagues from the police station. I said ‘do come, I will be at home in the evening,” the journalist said.

Background: Journalist Sevinj Vagifgizi has been under a foreign travel ban since 20 September 2015. The ban is related to a criminal case launched against Meydan TV last August. In addition to Vagifgizi, several other journalists collaborating with Meydan TV have also been banned from travelling abroad.

Council of Europe Warns of Sanctions against Azerbaijan