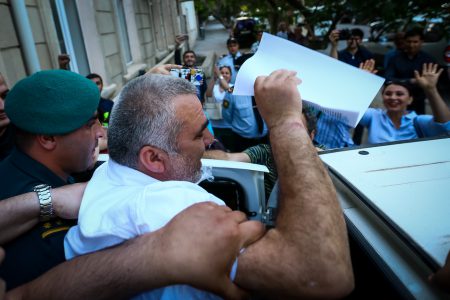 Journalist Afgan Mukhtarli has appealed to the Georgian Parliament calling on the Parliament to set up a commission to investigate his abduction in Tbilisi and transfer to Azerbaijan.

“I do not have previous conviction. I have not violated the laws of Georgia during my stay in this country. I have been abducted in Tbilisi and illegally handed over to the officers of Azerbaijani intelligence agencies at Lagodekhi border checkpoint,” the journalist writes.

Mukhtarli notes that he has been engaged in investigative journalism and criticised the Georgian authorities and the Georgian Dream Party which has a majority of seats in the parliament.

“The Georgian government was also troubled by my criticisms. So, my detention and transfer to Azerbaijan was in the interest of the Georgia government as well as the Azerbaijani government, because my detention would silence me,” Mukhtarli underlines.

Afgan Mukhtarli was abducted in Tbilisi and brought to Azerbaijan on 29 May 2017. In Azerbaijan, he was charged under Articles 315 (resisting a government representative by use of force), 318.1 (crossing the state border illegally) and 206.1 (smuggling) of the Criminal Code.

Trial of Aziz Orujov Begins With Testimony and Denied Motions