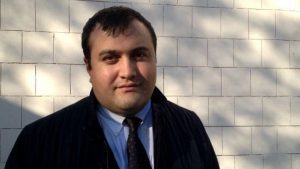 On 2 November, Elchin Sadigov, a lawyer primarily working on cases of political prisoners was threatened by the investigator in the criminal case against his client journalist Fikrat Faramazoglu, who is in the custody of the Main Organised Crime Department (MOCD) of the Ministry of Internal Affairs.

“The investigator told me that I and Fikrat Faramazoglu’s wife would pay a high price for giving an interview about Fikrat Faramazoglu subjection to torture by the Department’s staff. In case you did not know, we had informed the press about Fikrat Faramazoglu’s subjection to torture. I told the investigator that we were taking measures within legal boundaries. Later, false information was disseminated online that I and Fikrat Faramazoglu’s wife allegedly had a romantic relationship. This article was posted on website called reytinq.info. After I stated on Facebook that the said information was false and it constituted blackmail, several fake accounts were created in my name and friend requests were sent out to my friends,” Sadigov noted.

Commenting on the above-mentioned article, Reytinq newspaper editor-in-chief Afig Mirzabayli said that the provocative article had been posted on the website and shared on Facebook by hackers in the morning hours. “The article has been deleted and we are investigating who uploaded it,” the editor said.

Furthermore, illegally obtained personal photos of Elchin Sadigov and his wife lawyer Zibeyda Sadigova’s have also been disseminated on Facebook.

According to Elchin Sadigov, the police visited his home in Goygol region on 2 November  and  asked him personal questions about Sadigov himself and his relatives

On 3 November, the lawyer’s brother was summoned by the police. Sadigov contacted the police office and was told that they were gathering his detailed personal data in connection with an enquiry that had been received.

“I have been threatened before, too. I was openly threatened on 27 August  at a hearing in a criminal case investigated by MOCD,during the questioning of several MOCD officers and attesting witnesses who were their colleagues. The same day, when I left the court building and was approaching my car, I noticed a black substance under my car. As I went closer, I saw that it was motor oil. I immediately called my friends and, on their advice, called a tow truck. It turned out that a bolt of the crankcase located under the gearbox of my car had been unscrewed. Everyone I consulted told me that the bolt could not have been unscrewed without outside interference. On 25 October 2016, after Giyas Ibrahimov was sentenced to 10 years in prison, my personal Facebook and email accounts were targeted by hackers who sent me various viruses. As a result, my cell phone was blocked and was out of range for four to six hours,” the lawyer said.

In his appeal, Sadigov indicated that he is being harassed due to his professional activity.

“I believe that all that is happening is related to my professional activities as a lawyer that should be fully guaranteed in accordance with Article 61 of the Constitution. At the moment, my family’s and my lives are in great danger due to my work. We do not rule out the possibility of further pressure against us. Of course, it is the government’s responsibility to immediately and thoroughly investigate this kind of pressure and threats, and to take action accordingly. I hope  appropriate steps would be taken in accordance with the law to fully investigate the threats as well as the cyber attack committed against me, and to bring the perpetrators to justice,” the lawyer noted in his appeal.