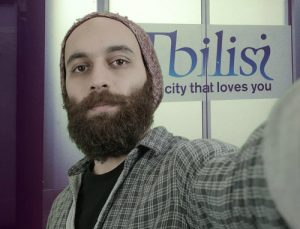 On 19 April, Meydan TV employee Jamal Ali was detained at the Tbilisi Airport, Jamal Ali said on 20 April. According to him, he was told that he could not be allowed to enter Georgia but was not given any explanation. “They said they entered my name into the system to check it, and it displayed a message that read ‘we cannot let you into the country ‘, “ Ali said.

Jamal Ali noted that he had refused to sign the documents presented to him, as he did not know the Georgian language. “After that, they took away my passport and held me in the temporary detention room until the next flight. I will use everything within my means to try to get back my violated rights“ Ali stressed.

After being held in the custody of the airport police until 5 a.m., Jamal Ali was sent back to Berlin.

The Meydan TV employee believes that the reason he was denied entry to Georgia is the video he had filmed in a church in Tbilisi. “I had travelled to Tbilisi several times before this and had not had any problems. In my first trip after the protest, I was not allowed to enter into Georgia, “ Jamal Ali noted.

Note that, a video posted on Meydan TV’s Facebook page in January 2017 showed Jamal Ali enter a church in Georgia and ask if its gas supply was provided by the State Oil Company of Azerbaijan Republic. After that, a protest was held in Tbilisi against Meydan TV in late March. Holding up posters bearing Jamal Ali’s pictures, the protesters said they perceived the video as disrespect to the church.

Recall that, Jamal Ali’s relatives were taken to Baku City Main Police Department in January due to Jamal Ali’s rap track called Heykal Baba (Statue Grandpa). After a few days of talks with the police, the rap was deleted from YouTube. Only after that, the police left the family alone.

Jamal Ali was a member of the rock band H. O. S. T . from 2007 to 2008. He was arrested by the police while participating in an anti-government rally in Baku on 17 March 2012. He left Azerbaijan after his release. Ali is currently residing in Berlin.