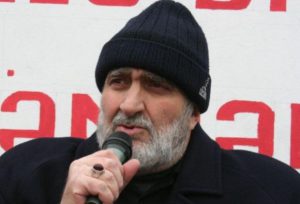 After the hearing, Karimov told journalists that he was innocent and did not consider himself guilty of the charges against him. He said he could not make any comments about the closed court hearing.

The next hearing was set for 2 March.

According to the indictment, Natig Karimov is accused of secretly collaborating with a foreign intelligence agency, fulfilling its orders for a long time, and spying to the detriment of state security, thereby committing treason. Karimov was detained on December 2015 and charged under Article 274 (treason) of the Criminal Code. The court initially ordered his pre-trial detention. However, Karimov was released to house arrest on 19 January 2016.

Azerbaijani national Ingilab Ahadov is also accused of collaborating with a foreign intelligence agency, carrying out its instructions on a regular basis since 2011, and spying to the detriment of Azerbaijan’s state security, thus committing treason. He is similarly charged with treason. The court has ordered his pre-trial detention.