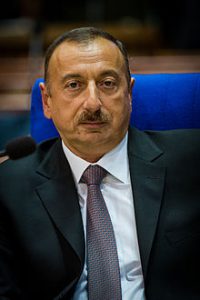 The President of Azerbaijan Republic has signed a Decree on the Application of One-Stop-Shop Principle in the Procedure of Provision of Grants by Foreign Donors on the Territory of Azerbaijan Republic, according to the President’s official website.
According to the Decree, in recent years consistent measures have been implemented in Azerbaijan with the aim of increasing state support to civil society institutions, as well as transparency and accountability in their activities. As a result, civil society organisations in the country have become stronger, and their role in the development and implementation of programmes that are important for the state and the society has considerably increased.

Recall that, under an amendment made to the NGO legislation in 2014, foreign donors need to obtain an opinion before providing grants.

Background: On 22 April 2014, the Prosecutor General of Azerbaijan Republic launched the criminal case №142006023 under Articles 308.1 and 313 of the Criminal Code of Azerbaijan Republic ‘into the violations found in the activities of NGOs of Azerbaijan Republic and foreign NGOs and their branches and representative offices’, and preliminary investigation of the case was entrusted to the Serious Crimes Investigation Department of the Prosecutor General’s Office. As part of this case, a number of NGOs were subjected to raids and tax audits, their bank accounts and their directors’ accounts were frozen, several NGO leaders and human rights defenders were arrested and eventually sentenced, and others were forced to flee the country. The criminal case still remains open and is used by the government as a means of prosecuting NGO representatives.