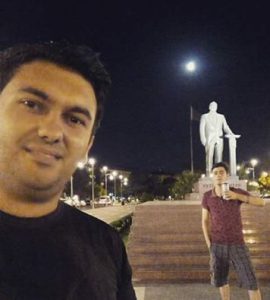 Ruslan Garayev was detained on July 20, but his family was not informed about his place of detention. His party leaned about his disappearance on July 21 and sent its representatives to Sumgayit Police Department, where they learned that Ruslan Garayev was in the custody of the police department. However, they were not told why the activist was detained, despite of the fact that according to the legislation, a person is entitled to inform his family or relatives and to have the assistance of a counsel from the moment of detention. The police have violated these rights of the party activist.

Ruslan Garayev took a selfie holding a can of energy drink in front of late President Heydar Aliyev’s statue in Sumgayit. It is assumed that the youth activist was arrested for this photo.

Recall that prior to this NIDA activists Giyas Ibrahimov and Bayram Mammadov were arrested on trumped-up drug charges and were subjected to pressure for spray writing on Heydar Aliyev’s statue on May 10, 2016.