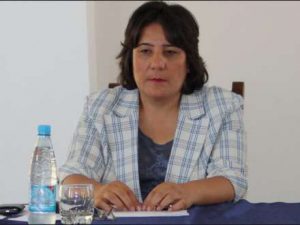 Gozal Bayramli, the deputy chairperson of the opposition party Azerbaijan Popular Front Party (APFP), received a death threat over a phone on 28 October, as reported by Bayramli herself.

“The caller warned me to mind what I write [about arrested Muslim Union Movement Chairman Taleh Bagirzade and arrested APFP Deputy Chairman Fuad Gahramanli]. When I asked him to introduce himself, he said ‘You’ll know when I come over. Say your address.’ Then he began yelling at me. I turned off the phone but that same person called again several times. I asked whether he was threatening me and he said yes,” Gozal Bayramli noted.

“The calls started coming after 14 October  when I was demanded at the Main Organised Crime Department to stop writing on Nardaran trial, defending Fuad Gahramanli and Taleh Bagirzade, as well as to cease writing critical articles altogether. The death threat that I received today is not an ordinary occurance.  I am being threatened for my political activity and my articles,” the APFP party representative added.

Gozal Bayramli reported the death threat to the hotline of the Ministry of Internal Affairs.

On 28 October, Bayramli was contacted by representatives from the 32nd police station of Surakhani district police department and was told that she would be invited for interview on 29 October.

Critical Poet Claims that He was Tortured