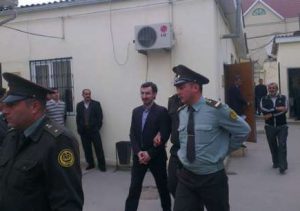 On August 31, Baku Grave Crimes Court, chaired by Judge Alovsat Abbasov, held a hearing on the criminal case of Muslim Union Movement’s Chairman Taleh Bagirzade, Jabrayilov Rasim Mirzababa oglu, Mustafayev Zakir Tapdig oglu, Jabbarov Jabbar Amirkhan oglu, Babakishizade Jahad Babahuseyn oglu, Abdulaliyev Shamil Adil oglu, Ismayilov Agil Azer oglu, Yariyev Ramin Maharram oglu, Guliyev Abbas Abdulrahman oglu, Khudaverdiyev Ibrahim Mammad oglu, Ismayilov Etibar Rasim oglu, Asgarov Bahruz Rahib oglu, Nuriyev Ali Hasrat oglu, Valiyev Alibala Javad oglu, Balayev Farhad Nasraddin oglu and Tagizade Abbas Hafiz oglu, who are charged under Articles 120.2.1 (homicide, committed by a group of people, a group of people on preliminary arrangement, an organised group or a criminal community/organisation), 120.2.3 (homicide, of the victim or his close relatives in connection to performance of service or public duty by the victim), 120.2.4 (homicide, committed with special cruelty or in publicly dangerous way), 120.2.7 (homicide, of two or more persons), 120.2.12 (homicide, with the motive of national, racial, religious hatred or enmity), 29 (attempted crime), 214.2.1 (terrorism, committed by a group of people on preliminary arrangement, an organised group or a criminal community/organisation), 28 (preparing to commit a crime), 214.2.3 (terrorism, committed with use of fire-arms or objects used as a weapon), 214-2 (open calls for terrorism), 220.2 (incitement to active insubordination to lawful demands of a representative of authority and to mass disorders, as well as to violence against citizens), 228.3 (illegal acquisition, transfer, selling, storage, transportation or carrying of fire-arms, their accessories, supplies and explosives, committed by an organised group), 228.4 (illegal acquisition, selling or carrying of a gas weapon, cold steel, as well as a throwing weapon, except for places where carrying of a cold steel is an accessory of a national suit or is connected to hunting), 278 (violent seizure or retention of power), 279 (creation of armed formations or groups not provided for by the legislation), 281.2 (public appeals directed against the state, committed repeatedly or by a group of people), 283.2.3 (instigation of national, racial, social or religious hatred and hostility, committed by an organised group), and 315.2 (resistance to or use of violence against a representative of authority) of the Criminal Code, Huseynov Abbas Mammadbagir oglu, who is also charged under Article 233 (organisation of actions violating public order or active participation in such actions) of the Criminal Code in addition to the above charges, and APFP Deputy Chairman Fuad Gahramanli, who is charged under Articles 220.2 (making calls for active insubordination to lawful requirements of representatives of authority and for mass disorders, as well as violence against citizens), 281.2 (public appeals directed against the state, committed repeatedly or by a group of people) and 283.2.1 (instigation of national, racial, social or religious hatred and hostility, by using or threatening to use violence) of the Criminal Code. An armed incident occurred between a group of believers and policemen in Nardaran settlement of Baku on November 26, 2015, during an operation conducted by the police. According to official reports, the shootout resulted in the death of six, including two police officers. Taleh Bagirzade, the leader of the Muslim Union Movement, and several believers were detained as part of the operation. A criminal case has been launched on the fact and is investigated by the Prosecutor General’s Office of Azerbaijan Republic. Fuad Gahramanli was arrested on December 8, 2015. His lawyer Yalchin Imanov said that Fuad Gahramanli was arrested due to his Facebook posts and his case was merged with the criminal case of the people arrested over the Nardaran incidents.
Operations officer of Main Organised Crime Department Jeyhun Imamverdiyev testified at the hearing. “Last year on the morning of November 26, an operational meeting was held at the Department under the guidance of Karim Alimardanov. At 1pm, we headed for Nardaran. It was a special operation. We took positions and started the operation. I jumped into the yard over the fence. Two police officers entered the yard through the door. As we entered in, the opposite side threw a grenade which exploded. They began shooting from left and right. We warned them not to shoot, but they did not comply with the warnings. So, we also opened fire. Then two of them, Zakir Mustafayev and Farhad Balayev, crossed the fence with grenades in their hands. Voices were coming from inside urging to not stop the shooting. Etibar Ismayilov was waving a dagger. I grabbed the dagger from his hand and found a grenade in his pocket. He was resisting and I neutralised him. Shahlar Jafarov neutralised Jabbar Jabbarov. After all of them were neutralised, we invited witnesses. A lot of cartridges were found in the house to the left of the entrance. Two police officers died of the injuries sustained. I was wearing a bulletproof vest. I was also hit by a bullet, but it got stuck in the bulletproof vest. The bullet was stuck in the lower part of the vest. An ambulance was called and first aid was provided to the wounded. Then the wounded were taken to hospitals in the ambulance,” Jeyhun Imamverdiyev said.
Asked by the lawyer whether he knew Farhad Bunyadov, Imamverdiyev said he did not. But the lawyer accused him of lying by reminding that he had mentioned the said person’s name in his statement.
The lawyer then asked what calibre was the gun which had fired the bullet stuck in his body armour. Imamverdiyev replied that he did not remember.
“What damage have you suffered,” the lawyer asked next. Imamverdiyev answered that two of his colleagues had died, they had been fired and thrown a grenade at, and although he had not been injured, one bullet had caught his bulletproof vest. He added that the bullet could have hit his body and killed him.
Due to the absence of many of the lawyers, the court hearing was put off until September 1, 10.00am.