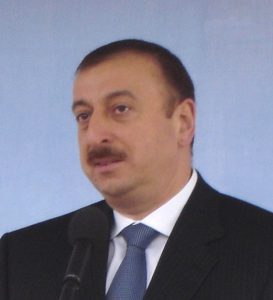 Aliyev stressed that the world was haunted by dangerous developments in 2016, as the migrant crisis in Europe deepened and terrorist attacks dealt a huge blow to the stability in the region, but meantime, Azerbaijan continued to develop in 2016. According to the President, the high-security measures in the country have enabled the Azerbaijani people to live in an atmosphere of peace and tranquillity. Emphasising that Azerbaijan’s image around the world has been very positive, President Aliyev noted that, in 2016, social issues in the country were resolved and work progressed well in the field of public services.

Ilham Aliyev underlined that the country’s security was ensured, and criticised the activity of some NGOs and speeches by well-known economists regarding the economic situation in the country. “Yes, there are various non-governmental organisations, and we all know from where they are financed. Their goal is to stain and smear us and to overshadow our work. Their long-term anti-Azerbaijan campaigns have not achieved their goal. Their rating is not even worthy of consideration. Also, some local self-proclaimed great economists make different speeches and give different assessments, which are absolute nonsense. As one of our beautiful proverbs goes ‘They cannot divide barley between two donkeys, but try to teach us a lesson’. I mean we should not pay attention to them. The important thing is that we are successfully developing. This is the assessment given by leading international economic organisations, and the reality of our situation. And the fact is that we managed to get out of this crisis in 2016 with honour. More than 100,000 jobs were created in our country. The growth of our agriculture and non-oil industry allows us to be optimistic about the future. Our plans are quite big, and once implemented they will boost the country’s economic development,” the president said.

The president did not touch on the obstacles created for NGOs. He did not speak about the measures taken by the authorities in order to eliminate the civil society in Azerbaijan. He talked about economic development without commenting on the facts that independent economists referred to in their assessments of existing economic problems. Ilham Aliyev’s remark about ‘those unable to divide barley between two donkeys…’ has been widely discussed and ridiculed on social networks recently.

Recalling that 2016 had been declared ‘The Year of Multiculturalism’ in Azerbaijan, Ilham Aliyev said Azerbaijan became the centre of multiculturalism worldwide. The president spoke about the prestigious international competitions hosted by Azerbaijan.

President Ilham Aliyev said interethnic and interfaith relations in the country were regulated and settled at the highest level, serving as a model for the world. He noted that Azerbaijan would continue to go along this path. Meanwhile, the president failed to say anything about the fate of an arrested cleric who is currently under trial. He neglected to touch on the life sentence and lengthy prison terms sought for Muslim Union Movement chairman Taleh Bagirzade and his associates.