President Ilham Aliyev Claims There Is Free Press in Azerbaijan 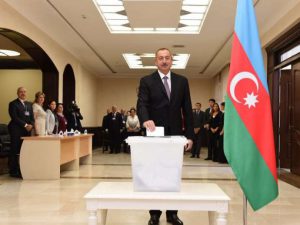 President of Azerbaijan Republic Ilham Aliyev hosted a group of participants of the Fifth News Agencies World Congress on 17 November. During the event, the President reaffirmed that the freedom of press is ensured in Azerbaijan.

John Daniszewski, Vice President of Associated Press Agency, took the floor at the meeting. “Mr. President, as far as we know, several journalists remain behind bars in your country. Presidential Aide for Public Affairs Ali Hasanov told us that their incarceration is not related to their journalistic activities. They have been arrested for hooliganism, tax offences and other similar issues. For all we know, following Khadija Ismayil’s arrest the bureau of the Radio Liberty was not allowed to resume operations. There are some journalists outside the country who claim that they are persecuted. During your speech yesterday you clearly mentioned that you want Azerbaijan to be better known in the world. What can you say about some possible steps that could be taken to restore world’s confidence in Azerbaijan and press freedom in the country,” Daniszewski asked.

“Press freedom is fully provided in Azerbaijan. It is enough to pay attention to the substance of the matter. How can one say that press freedom is restricted when there is free Internet in our country, there is no censorship, and 75 percent of the population are internet users?! How can press freedom be restricted when we have 2 million people on social networks, Facebook and Twitter?! We do not pursue such a political goal. Our goal is to maintain a modern, developing and democratic society where all freedoms are ensured. The same goes for all other freedoms as well, for example, freedom of assembly. Sometimes, they criticise Azerbaijan for the lack of freedom of assembly. This is not right. It is enough to look at the rallies held by the opposition this summer. They could not gather many people there, but still they assembled freely, and there was no restriction. I repeat it once again that the press freedom is fully ensured in Azerbaijan. Some cases related to journalists should not be taken out of the context. There are many countries where journalists commit crimes and are prosecuted. We should be objective and take an objective approach to issues,” the President said in response.

At the moment, there are 6 journalists, 5 bloggers and 2 poets behind bars in the country on various trumped-up charges merely for expressing critical opinions.

Over the past one month, MPs and other public officials have brought up the issue of internet regulation.

On 15 November, Prosecutor General of Azerbaijan Zakir Garalov submitted a draft proposal to Milli Majlis (Parliament) on adding Article 148-1 (posting slander or insult on the internet information resource by using fake user names, profiles or accounts) to the Criminal Code.

President’s argument concerning freedom of assembly being ensured in the country does not hold. For instance, during the opposition rally against the referendum held on 17 September 2016 the police used violence against the rally participants and a number of activists, including journalists, were arrested. Some of the arrested youths were sentenced to administrative imprisonment, while others were fined. Furthermore, internet access was cut off during the rally, and people who wanted to join the rally were denied access to the venue.