Protest in front of the Council of Europe Headquarters 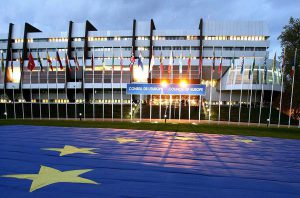 23 January the Institute for Reporters Freedom and Safety (IRFS), in cooperation with Strasbourg-based Azerbaijani activists, organised a protest outside the Palace of Europe. The Palace of Europe in Strasbourg France is the home of the Council of Europe. The protesters demanded that the Parliamentary Assembly of the Council of Europe (PACE) put an end to corruption and lobbying practices, appoint a rapporteur for political prisoners and suspend voting rights for the Azerbaijani delegation.

16 January 2017
We are writing with a view to the criminal case against the former Vice President of the Parliamentary Assembly of the Council of Europe (PACE), Mr. Luca Volonte, who is being investigated by the Milan public prosecutor’s office for allegedly accepting €2.39m in bribes from two members of PACE, Mr. Elkhan Suleymanov and Mr. Muslim Mammadov, in exchange for his efforts to thwart the 2013 critical resolution on political prisoners in Azerbaijan.
We urge you to immediately expel the two members of the Azerbaijani delegation accused of bribing other members (Elkhan Suleymanov and Muslim Mammadov), pending a full investigation. Furthermore, we urge you to suspend the voting rights of the entire Azerbaijani delegation, which we believe were completely aware of the bribery but failed to take a single step to stop it.

The European Stability Initiative’s report: The European Swamp (Caviar Diplomacy Part 2) – Prosecutors, Corruption and the Council of Europe Parliamentary Assembly [1] as well as the investigation conducted by the Italian broadcaster RAI reveal shameful details of the corruption scam.
To this end, the 2013 vote on Mr. Christoph Strässer’s resolution may not be considered legitimate. As a matter of urgency, PACE should immediately re-establish the mandate of a special rapporteur on political prisoners in Azerbaijan – a credible member of PACE with a solid record of scrutinising and reporting on human rights abuses – to write an objective report, in cooperation with the Council of Europe INGO conference experts and internationally-recognised rights watchdogs.

We recall that, in 2014, PACE, through its Committee on Legal Affairs and Human Rights (AS Jur) decided to proceed with a separate report titled “Azerbaijan’s Chairmanship of the Council of Europe: What follow-up on respect for human rights”. Since then, there has been no meaningful follow-up after the 2014 decision. In the most recent example, neither the As Jur rapporteur nor his colleagues at the Monitoring Committee, and not even the PACE leadership, reacted to the harsh ten-year sentences handed down by a court in Azerbaijan to young political activists Giyas Ibrahimov and Bayram Mammadov, along with allegations of ill-treatment during their detention. To the contrary, the European Union immediately issued a statement, in which they called the sentences “particularly worrying [2]”.
On 18 November 2016, the highest court in Azerbaijan considered the appeal by the Azerbaijani political prisoner and opposition leader Mr. Ilgar Mammadov against his seven-year long prison sentence and ruled to uphold it. The continued illegal imprisonment of Mr. Mammadov constitutes a blatant breach of Azerbaijan’s explicit legal obligations, and is an affront to the Committee of Ministers of the Council of Europe, which has repeatedly demanded that Azerbaijan comply with the 2014 decision by the European Court of Human Rights and immediately and unconditionally release Ilgar Mammadov. Contrary to the Committee of Ministers, which is now considering legal action against Azerbaijan, PACE has failed to take a decisive action against such a flagrant and persistent violation of the Convention and of the principles on which it is founded, including respect for the binding judgments of the European Court of Human Rights.
To this end, we call on PACE to eliminate any trace of corruption and misconduct within the Pan-European human rights organisation, and to demonstrate a strong and consolidated stance on human rights violations in Azerbaijan.

Specifically, we urge you do the following: