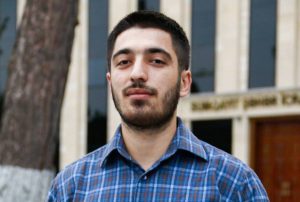 REAL Movement’s Sumgayit branch member Rahim Shaliyev, who was arrested on 20 February, has been subjected to torture and degrading treatment in Sumgayit City Police Department, youth activist’s lawyer Yalchin Imanov said after meeting with Shaliyev in the temporary detention place of the Police Department on 22 February.

Shaliyev told his lawyer that the allegations made in the decision on sentencing him to 30-day administrative imprisonment were a lie, as he had neither uttered obscenities in the street nor resisted the police and that the police took him from his house on 20 February morning.

According to Shaliyev, two police officers came to his house in the morning and told him that he had to accompany them to the 4th police station of Sumgayit city and he went with them. From there, he was taken to Sumgayit City Police Department. In the Department, a deputy police chief asked whether Shaliyev was a member of REAL and his answer was yes.

“He asked for how long I had been a REAL member. I said since 2013. He then said ‘What enormous folly have you committed’,” says the youth activist, who was taken out of the room, but was returned there again. This time they shouted at him by saying ‘you son of a dog, what have you written last’, asking what his last Facebook post was. “I told them my blog post. He went on to ask how many members REAL had and what my role in the Movement was and insulted me. I said I was an ordinary member. He then instructed the man next to him to ‘bring me to senses’. The man took me to the opposite room. There, about five strong men started to beat me up and insult me. I told them that I had a heart problem and trauma on the left side of my head, and asked them at least to not hit in these parts. But instead, they began slapping on the traumatic area even more, and hitting me over my heart and in my back, arms, legs and groyne. I felt bad, began screaming and tried to flee from the room. One of them grabbed my waist, lifted me up and knocked me on the floor. They sought to break my fingers. Four of the fingers on my left hand were severely injured. I lost balance and fell, but managed to push them and get my fingers out of their hands. Then, they took me to drink water. I drank water from the tap, and they took me to the room next door to the previous one. There were two more men in there. Two of those who had tortured me also came afterwards. They got me seated on a sofa. They asked me about REAL members, websites that I am cooperating with, my Facebook and personal blogs, and my relatives. I said I had no contact with my relatives and was an ordinary member in REAL and had only attended lectures. They lifted me up, slapped on my head, punched me in the shoulder and insulted me. Then, they asked for my Facebook password. They hit me, but I said I did not know my password. After that, they took me back to the 4th police station. There, they drew up a false record, stating that I had allegedly talked aloud indecently on the phone in Sulh Street and disobeyed the lawful requirement of the police. In fact, no such thing was the case. The police took me to the police station from my house. In the Department, I was forced to sign the record and the statement under psychical and psychological pressure.”

After that, Shaliyev was brought before the court. On Judge Ruhiyya Asgarova’s instructions, they made him write a repeat statement on having committed an administrative offence. As a result of a brief hearing, the youth was convicted of minor hooliganism and resistance to police and was sentenced to 30-day administrative imprisonment.

The REAL activist was brought back to Sumgayit City Police Department. “In the Department, they forced me into cleaning the toilet and took my photos and filmed me while cleaning. Then, they took me to a room where there were 4 to 5 women. They made me to take off my outerwear and trousers and to clean the floor in underwear. An officer shouted at the women, by saying ‘do not laugh, you whores’. Again, they took photos and filmed a video. Then, they took me to the deputy chief’s room. The deputy director asked me ‘did you come to senses?’ He asked me about what I was doing in REAL. Then, they took me to another room. There, they wished to know whether I knew the activists of REAL’s Sumgayit branch, and where Elkin Khalilov, Kamil Allahyarov, Elchin Mahmud, Kanan and others lived. When they asked if there were other members and I said I did not know, they threatened to baton-rape me and began to beat me up again. They were again hitting on the traumatic side of my head. After calming down, they said ‘We will talk to you later’. During the interrogations, they asked me who the people that had gathered outside and in front of the court building were and what they were doing. Right now, I have acute pains in the outside of my head due to the beatings. I have developed ear and hearing problems.”

Finally, Shaliyev told lawyer Yalchin Imanov that he had not committed any administrative offence, and had been arrested for his Facebook posts as a socio-political activist and writer.