Residents Unhappy with Compensation Offered for Their Houses 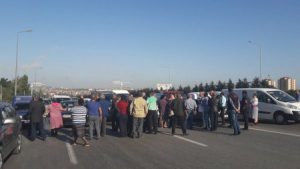 On October 7, a group of residents of the Motordrome residential area located near the Avtovagzal metro station blocked Baku-Sumgait highway in protest against the inadequate compensation offered in return for the demolition of their houses. It resulted in a massive traffic jam. According to the protesters, Baku Metro Closed JSC has decided to demolish the residential houses to make room for metro construction, but they are dissatisfied with the low compensation rate. “They offer us 500 to 600 AZN per square metre. This is too small, we cannot buy a new house for this money,” one of the residents said.

First deputy head of Binagadi District Executive Power Ilgar Suleymanov and the police arrived in the area. As a result of negotiations, the residents opened the road.

Ilgar Suleymanov said 500 AZN was a preliminary rate and the resettlement will be carried out after agreeing the rate with the residents.