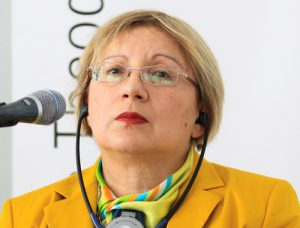 Supreme Court, chaired by judge Hafiz Nasibov, held a hearing on the cassational complaint filed as part of the criminal case of human rights defenders Leyla and Arif Yunus.

Leyla and Arif Yunus were arrested in 2014. They were charged with state betray, fraud, tax evasion, illegal business, falsification of documents and deliberate use of fake documents. On June 23, 2015, the criminal case against Leyla and Arif Yunus was split in order to investigate the treason charges in a separate proceeding. At the conclusion of their trial on the remaining economic offences, Leyla and Arif Yunus were convicted by Baku Grave Crimes Court on August 13, 2015, and were sentenced to 8.5 and 7 years in prison respectively. The court also ordered their properties to be confiscated and the funds in their bank accounts to be transferred to the state treasury. On November 12, 2015, Baku Court of Appeal granted Arif Yunus release on recognizance not to leave, and he was freed from the courtroom. On December 9, 2015, the court commuted Leyla and Arif Yunus’ jail sentences to suspended sentences with 5-year probation. The Yunus have filed the cassational complaint seeking full acquittal.

Leyla and Arif Yunus could not participate in the hearing as they are abroad for medical treatment. The Yunus reportedly do not want to return to Azerbaijan and have sought political asylum from the Dutch government.

However, the presiding judge announced postponement of the hearing, citing the convicts’, i.e. Leyla and Arif Yunus’ absence. He added that the convicts were not present due to their illness and the hearing was put off.

According to Article 419.2 of Criminal Procedure Code (CPC) of Azerbaijan Republic, the substantive examination of the complaint or appeal shall be conducted by the Supreme Court as a bench of three judges. The persons entitled to lodge an appeal and the public prosecutor representing the prosecution before the Supreme Court shall have the right to attend the court hearing. In other words, attending the hearing is Leyla and Arif Yunus’ right provided by law not an obligation, i.e. their presence is not important.

Also, Article 419.4 of CPC states that, the absence of the person who lodged the appeal, if he was duly informed, shall not prevent the Supreme Court hearing from taking place.

It should be pointed out here that, in contrast to Yunus’ case, in the cases of journalists Khadija Ismayil, Seymur Hazi and Parviz Hashimli, the court did not consider their attendance important and issued the decision although the journalists had applied to court to ensure their presence at the appeal hearing.