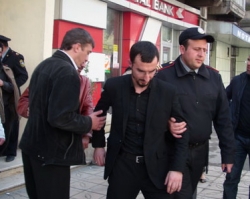 Background: Elchin Gasimov, deputy of Muslim Union Movement chairman Taleh Bagirzade, was arrested on November 5, 2015. He was initially sentenced to 30-day administrative arrest for insubordination to lawful requirements of a police officer, but afterwards he was charged with hooliganism and resistance to authority and was placed in pretrial detention. He was later charged with illegal possession of a weapon. Elchin Gasimov’s confinement in the custody of Sabunchu police office drew protests from believers.